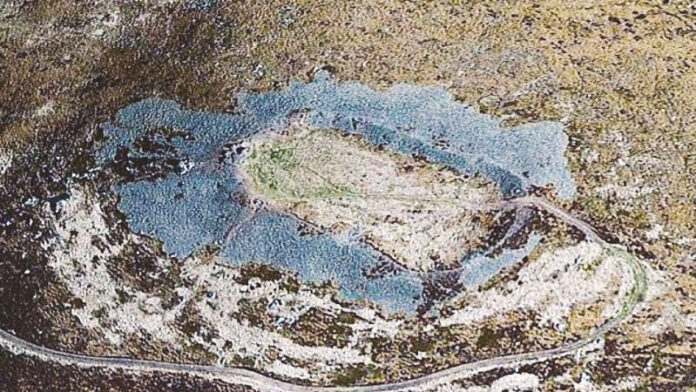 The European continent is known for its incredible history, medieval temples, castles and impressive fortresses, and between 700 BC and 300 BC, a large number of these fortresses were built in Scotland, many of them on top of hills, with walls made of stones stacked without the use of mortar.

At first, this may not seem anything out of the ordinary, there are many of these structures all over the world, and not just in Europe, however, the whole story changes completely, moving from ordinary to extraordinary after a more detailed examination, which reveals that many of the stones that make up the walls of these ancient fortresses are fused.

Some of the areas of these forts were converted into a kind of glass, presenting the remains of what were undoubtedly air bubbles and cast rock drops that are evidence that the stones have already been subjected to temperatures that led to a vitrification process.

In 1777, British geologist John Williams, author of “Natural History of the Mineral Kingdom”, was one of the first to describe these structures and their mysteries after examining some strange ruins, of which more than a hundred examples were found throughout Europe, but mainly in Scotland.

As the first vitrified structures were discovered in Scotland, it was thought that they were unique to this region, however, examples of similar structures were found in Germany, Poland, Hungary, Turkey, Iran, Portugal, France, Sweden, among others.

During the last three centuries, archaeologists have tried to answer the questions surrounding these mysterious fortresses, but not a single scholar has been able to explain to this day how this was possible.

What is even more strange is that vitrification is not total at all strong, nor is it homogeneous on the walls of the same locations.

Experts have found that in some cases the stones appear partially calcined and fused, while in others they are covered by a layer of vitreous enamel and sometimes, although rarely, the entire length of the wall presents a solid mass of a vitreous substance.

Some scholars claim that the temperatures to which these fortresses had to be subjected to the vitrification process are comparable to the detonation of an atomic bomb.

Other researchers believe it was an intentional process to strengthen the defenses of the strong, but in reality, this would have weakened them, so it is unlikely that this was their intention, while other theories point to the possibility that vitrification may have been the product of deliberate destruction by the attackers after the capture of the forts.

It is known that the vitrification would hardly have been the result of war damage as a result of a siege, because to achieve the glazing, the fire should have remained lit for days at a temperature of at least 1200º Centigrade, something that is not impossible, but is extremely unlikely due to the large number of buildings scattered throughout Europe that have the same characteristics.

Recent studies suggest that vitrification could have been created by massive plasma events, such as powerful solar flares, which occur when ionized gas in the Earth’s atmosphere takes the form of gigantic electrical explosions, which can melt and vitrify rocks.

In the 1930s, archaeologists Vere Gordon Childe and Wallace Thorneycroft conducted an experiment with a gigantic fire targeting a stone wall, and a similar experiment was repeated in 1980 by archaeologist Ian Ralston.

In both cases, the experiments produced a partial glazing of some of the stones, but could not explain how it could have been produced on a scale as large as it happens in the vitrified forts.

The dating of these fortresses across Europe covers a wide range of dates. The oldest ones were built during the Iron Age, around 500 BC, but there are also many buildings with similar characteristics dating back to roman times, while the most recent correspond to the Middle Ages.

In the absence of a definitive theory or conclusive evidence, Europe’s vitrified forts remain one of the strangest and most impressive geological and archaeological anomalies in the world.