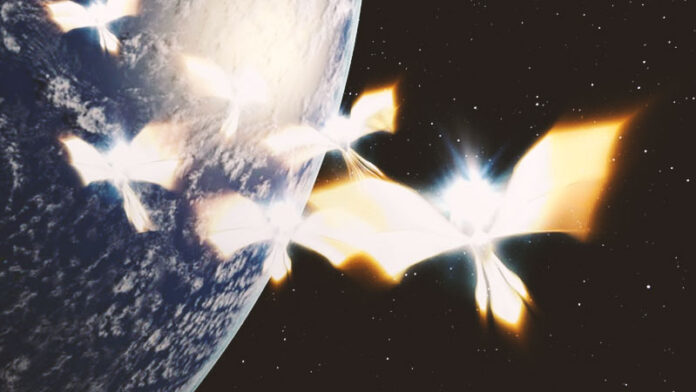 In July 1984, aboard a Soviet Space Station, one of the strangest sightings of cosmic phenomena occurred. Russian cosmonauts were orbiting the Earth when humanoide creatures that possessed wings and faces with a peaceful expression projected general feelings of peace and tranquility among the crew members.

The event was witnessed not by a single person, but by six individuals who claim to have seen the same thing on two separate occasions, ruling out the possibility that they were victims of some strange visual occurrence.

Although it received some journalistic coverage at the time, the details of what happened only came to light at the end of the Cold War.

Several theories have been developed over the years. While some believe that the experience was nothing more than a bizarre hallucination, others believe in a more divine answer and that these strange beings would be real angels.

The Salyut 7 Space Station was launched on April 19, 1982 with the intention of conducting scientific experiments in space and remained in Earth orbit for 4 years, during which it was visited by 10 groups of cosmonauts.

The first strange sighting occurred on July 12, 1984, when the crew consisted of Soviet cosmonauts Leonid Kizim, Vladimir Solovyov and Oleg Atkov, and a bright “orange cloud” appeared to involve the entire space station. At first, they believed that could have been an explosion and consequently the orange glow was actually a fire. The investigation proved that was not the case.

The three cosmonauts rushed to the lookouts, almost blinded by the clarity that flooded the space station, and when their eyes finally adjusted, each of them could clearly see huge “angels” floating outside.

There were seven of these “celestial entities” and the cosmonauts stated that they were approximately 25 meters high and 60 meters wide with “open wings”. A later report stated that the entities seemed to recognize their presence inside the space station, even smiling at them.

The men were mesmerized by what they had been seeing for about ten minutes until the “angels” disappeared, as quickly and silently as they had arrived.

The guideline of this mission was to ensure that Svetlana Savitskaya completed a successful spacewalk before the Americans, thus becoming the first woman in history to accomplish this feat on July 25, 1984, marking a major victory for the Soviet Space Program.

While this was happening the mysterious angels returned and this time were witnessed by all six cosmonauts.

The events were pretty much the same as the first time, the cosmonauts again reported sightings to Mission Control on the ground. Once again, the reports spoke of these strange glowing angel-like creatures, apparently aware of the crew and smiling at them. As before, after several minutes circling the space station, they disappeared peacefully in the vastness of space.

“What we saw were seven giant figures in the form of humans, but with mist-shaped wings and halos, as in the classical representation of angels,” said cosmonaut Solovyov.

Upon returning to Earth, each of the cosmonauts underwent intense and prolonged examinations, both physical and mental in nature, and all passed these exams and procedures convincingly. In a light, nothing indicates or proves that what they saw was a hallucination and there was no suggestion, or reason to suggest, that the incident was a collective lie of the Soviets.

However, the accounts of the cosmonauts and the incident itself came largely from the reports and research released by the Russian government, and although the incident reached international news, there was no major repercussion and the incident was soon forgotten.

More recently, with the end of the Cold War and the rise of the Internet, the story has spread and it has joined complaints from NASA witnesses who claim that these “angels” regularly appear in hubble telescope photos and international space station videos.

In 2008, a NASA Spacecraft Operator claimed to have witnessed a “large alien” in a Space Shuttle’s cargo bay.

“I, Clark C. McClelland, former ScO [Spacecraft Operator], Space Shuttle Fleet, personally observed an 8 to 9 foot tall ET on his 27-inch video monitors while on duty in the Kennedy Space Center, Launch Control Center (LCC). The ET was standing upright in the Space Shuttle Payload Bay having a discussion with two tethered US NASA astronauts! I also observed on my monitors, the spacecraft of the ET as it was in a stabilized, safe orbit to the rear of the Space Shuttle main engine pods. I observed this incident for about one minute and seven seconds. Plenty of time to memorize all that I was observing. It was an ET and alien starship,” wrote McClelland on his own website.

Many ancient texts and holy books speak openly about angels and those who acted as messengers of God. The Old Testament of the Bible talks about the “fallen angels”, who were cast on earth for their lust for power and eventually surrendered to sin.

The “Book of Enoch” refers to these beings as “The Watchers”, as the 200 angels who abandoned their original dwelling in Heaven and descended on Earth, mingling with the daughters of men and giving birth to the “Nephilim”, the sons who were born of the union between humans and rebellious angels. Then “Holy Watchmen” were sent by God to punish and try to reorganize the chaos the Nephilim caused on earth. Led by archangel Michael were Gabriel, Raphael, Uriel, Raguel, Zerachiel, and Ramiel, totaling seven archangels.

Coincidentally, Russian cosmonauts also reported having sighted seven entities in space and for those accompanying the Ancient Astronaut Theories, these angels or archangels would actually be extraterrestrials.