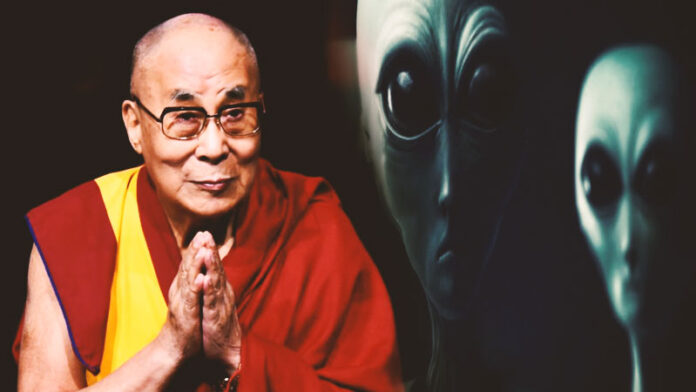 The vast majority of people on Earth believe that we are not alone in the universe and there is intelligent extraterrestrial life out there, and hearing a world-renowned personality bringing this theme to the fore is of utmost importance.

To resonate with what the Dalai Lama says, that everything is interconnected and that we are all one in this world, and that we have to see everything and everyone with another face besides ourselves, is really something that must be taken into consideration.

This is not just a spiritual belief, modern science is looking at these facts with other eyes, quantum physics research increasingly proves the concepts of multidimensions, universes and parallel realities, and the interconnection of all things.

We must be prepared for possible contact with other stellar civilizations and that one day, perhaps not so far away, we can have a future in the stars ourselves.

Check out below the subtitled video of a lecture by the Dalai Lama talking about his expectations of a contact with extraterrestrials:

Many believe that extraterrestrial visitation to planet Earth is not a new thing and has been going on for a long time, and numerous research shows that there is enough evidence to support this claim.

Evidence ranges from ufologist research to official governments and space agencies documents and high-credibility statements such as military, government officials, pilots and astronauts who have already stated they know about or had contact with extraterrestrials.

“There is abundant evidence that we are being contacted and that ancient earth civilizations were also visited long ago” – Dr. Brian O’Leary, former NASA astronaut and Professor of Physics at Princeton.

“Yes, there was a crashed ship and the bodies were recovered. We are not alone in the Universe, they have been here for a long time” – Edgard Mitchell, former astronaut of Apollo 14.

“Decades ago, visitors from other planets warned us about the direction we were going and offered us help. Instead, some of us, interpreting their visits as a threat, decided to shoot first and ask later. It’s ironic that the U.S. is fighting monstrous wars, claiming to bring democracy to these countries when it itself can no longer claim to be called a democracy, when trillions of dollars are spent on shady projects that both Congress and the Commander-in-Chief keep secret” – Paul Hellyer, canada’s former Defense Minister.