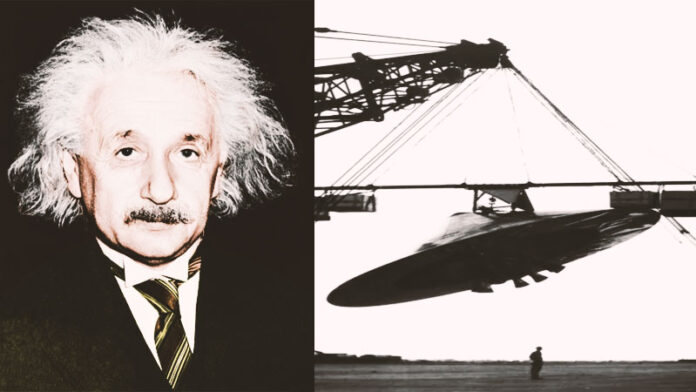 Scientist Albert Einstein, known for his Theory of Relativity, had long believed in alien life.

In a 1920 interview, he said: “There is every reason to believe that Mars and other planets are inhabited. Why should Earth be the only planet that supports human life? It is not unique in any other respect.”

A series of recordings made by Dr. Shirley Wright, Einstein’s assistant, were disclosed recently and tell how she and Einstein took a top-secret trip to see the UFO that would have crashed in Roswell, New Mexico, in July 1947.

At the time, there was widespread publicity that an alien spacecraft had crashed in the New Mexico desert, but US government officials soon denied the information and claimed that the incident was just a weather balloon.

Dr. Wright claimed that Einstein wrote a report on the visitation and both were required to keep what they saw confidential. She kept her secret for nearly seven decades, but shortly before her death in 2015, at age 85, she agreed to be interviewed by ufologist Sheila Franklin.

She explained to Sheila that in July 1947, she was chosen from a number of talented students to work with Professor Einstein during the summer of that year. She went through extensive security and reference checks because her job would put her in a delicate position.

Dr. Wright was then called upon to participate as Einstein’s assistant in a “crisis conference” to be held at an army air base in the Southwest, with military personnel and other scientists.

Einstein and his assistant flew from Princeton to Chicago on a regular flight, from where they took another flight to a small civilian airport. It was raining when they landed and a colonel led them about 100 miles through the desert to the base.

They were taken to a heavily guarded hangar, and it was there that Shirley and Einstein realized they were dealing with something out of the ordinary.

According to hers statement, the craft appeared damaged on one side and was shaped like a concave disk that took up a quarter of the size of the hangar, and unfortunately she was not able to get close enough to see the details as the craft was surrounded by guards, photographers and experts who studied it.

In the words of Dr. Shirley Wright:

“The ship’s body was what I would call today a very reflective material, but when you got close to it, it became opaque. The military was very curious about the craft’s materials, but what interested Professor Einstein most was the propulsion system, and he was not the least bit disturbed by the evidence.

I didn’t write down his opening comments, but he said something about that he wasn’t surprised that extraterrestrials came to Earth and that it gave him hope that we could learn more about the universe. Einstein said the contact should be a boon for both worlds.”

But the assistant and the professor didn’t just see the spaceship, inside the hangar of the air base were also extraterrestrial creatures.

“Some of the experts were able to take a closer look, including Einstein. To me, all five looked like each other.

They were about 5 feet tall, hairless, with large heads and huge dark eyes, their skin was gray with a slight greenish tinge, but most of their bodies were not exposed, being dressed in tight-fitting suits.”

On another part of their journey, she and Einstein were escorted by jeeps across the desert to an isolated building with guards at the door. They were met by an officer in an area where uniformed personnel and medics were gathered around a stretcher on which another creature sat.

“The creature made unusual sounds and appeared to be in pain, but never spoke. I was kept at a distance, but I can describe it as a grayish biped, perhaps a little more human than the others I’ve seen before. His torso was grotesquely expanded. Nothing was said to me and soon we were all thrown out of the place. I later learned that the creature had survived. Einstein had the clearence level and made a report, but I didn’t see it. I was just told to keep my mouth shut.”

Although Dr. Wright was not required to sign any papers, she mentioned in her recordings that her trip to Roswell would be denied, that there would be no written documentation of the visitation, and that any evidence would be excluded.