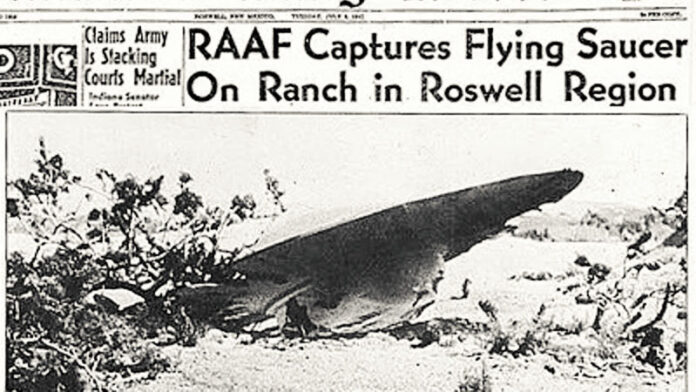 After more than 70 years, the Roswell Incident continues to attract interest after all these years, and a British investigator has made new and shocking revelations about what would have happened that July 1947 day in New Mexico (USA).

A mysterious object crashed into the desert during a storm near what was then called Roswell Army Air Field (RAAF) in July 1947. The location was renamed Walker Air Force Base in 1948.

An RAAF press officer issued a statement on 8 July 1947 describing the crash and recovery of “a flying saucer”, which many interpreted as evidence of alien contact. But the next day, another army officer told reporters that RAAF officers had only recovered a weather balloon, not a flying saucer.

Newspaper photos from the time show Major Jesse Marcel posing with pieces of what appeared to be a torn high-altitude weather balloon with a radar reflector. But in the decades since, many have speculated about the military’s initial “flying saucer” report, asking if the wreckage was more unusual than the photos suggested.

Investigator and expert Philip Mantle claims that Major Jesse Marcel, the first soldier to arrive at the crash site, would have hidden materials taken from the UFO crash site and acted to cover up the case. At the time, Major Marcel was an RAAF Intelligence Officer and was assigned to go to the site and “pick up pieces of devices and assist in future investigations”.

The source for these new details would be Major Marcel himself, who admitted, before he died in 1986, that he helped to cover up what happened at the impact site.

According to a witness interviewed by Mantle, the major confided that he kept some of the material he collected that day inside a water heater in his home.

The witness, Calvin Parker, now 64, said he met the major after he himself had an encounter with a UFO and a mutual friend introduced him to the former Air Force officer.

“He told me he was ordered to say it was just a weather balloon that crashed and, being a good soldier, he carried out those orders,” said Calvin.

Roswell’s story now takes a new turn, as Major Marcel’s family has revealed that they kept their personal secret diary about Roswell, which contains coded and hitherto unknown secret clues and observations about the accident that will help shed light on what really happened at Roswell in 1947.

The secret diary and its contents were featured in the History Channel series Greatest Mysteries in an episode called Roswell: The First Witness, released on December 12, 2020 in the United States.

The show’s host, Ben Smith, is a former CIA agent and the show’s principal investigator. He thinks it’s very unusual that the day after the government claimed to have recovered a UFO, history was changed and maintained that it was just a weather balloon.

“The government claimed to have recovered a UFO, they made a press release about it. No other government in the world has said, ‘We have a spacecraft,’ and the next day there was another press release that said, ‘Don’t worry, it was just a weather balloon,'” says Smith.

The documentary revisits the Roswell crash site, incorporating aerial surveys and mapping, and using multispectral imaging to detect micro-depressions in the ground that could indicate where the wreckage fell.

But the central component of the new investigation is the diary that Major Marcel kept during his investigation of the Roswell accident, written in coded language, and which is now in the possession of his grandchildren who state: “My grandfather often told me that What appears in the photo published in the newspaper, the one in which he holds the remains of a weather balloon, was not what he actually found at Roswell, and he believed that the object that fell in the New Mexico desert had extraterrestrial origins.”

“It’s the origin story of UFOs, the prospect of a government cover-up for alien contact. Science fiction already existed, but the things that passed to us through pop culture found their origins in the government secrecy surrounding this strange sequence of events in 1947. It all starts in Roswell. Now, a forensic analysis of Marcel’s secret Roswell journal could reveal the messages he wrote about the accident at the time it happened,” says Smith.

Interest in UFOs has not waned since the Roswell Incident. In 2017 and 2018, US Navy pilots recorded three encounters with fast-moving UFOs (also called UAPs, or Unidentified Aerial Phenomena) and the Navy officially made videos of these encounters public. Also in 2017, a former Pentagon official confirmed the existence of a federal agency that had been secretly investigating UFOs since 2007 and which may be active to this day.