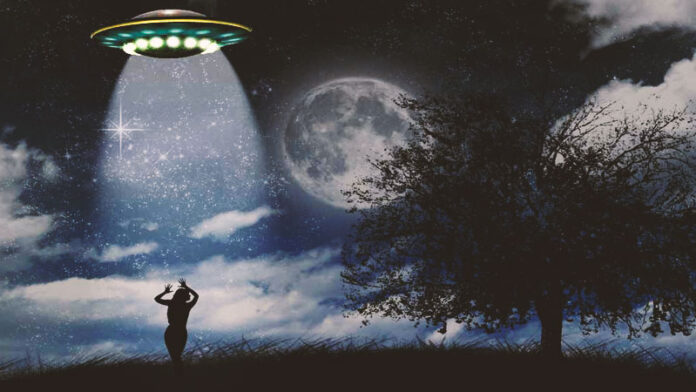 On October 4, 2001, Amy Rylance, then 22 years old, had no idea what was about to happen. She was spending the day with her husband Keith and friend Petra at Keith’s home in Gundiah, Australia.

During the night, Amy fell asleep on the couch, while her husband went to rest in the master bedroom and her friend Petra stayed in the guest bedroom.

During this night there was a very strong storm. Petra approached Amy to see if she was okay in the room. From here, all the events that took place have no apparent explanation and have led this case to become one of the most enigmatic alien abduction cases.

Outside the window, Petra spotted some kind of saucer-shaped craft and after a moment of shock, she ran to tell Keith what was going on, but when she did, it was too late.

Keith ran to find his wife, but however, Amy was already gone. So he called the police to report what had happened, ignoring Petra’s strange descriptions of his disappearance.

When the police arrived, they did not find any trace of the missing woman, although they were able to detect some clues that seemed strange to them. In the window through which the girl had supposedly come out, the bush below was completely deformed, possibly from being subjected to a high degree of heat. After this unexplained discovery, the phone rang.

On the other end of the line was a woman calling from Mackay, an eight-hour drive from Gundiah. It had only been half an hour since Amy’s disappearance.

The woman claimed to have found Amy at a gas station. The young woman was wandering aimlessly, apparently dizzy and dehydrated as she babbled nonsense. After the phone call, Amy was taken to the hospital.

At the hospital, Amy recounted her experience: she remembered lying on the sofa in the living room and suddenly finding herself in a large room while two tall figures reassured her and took samples from her. These tall, slender figures wore a full-length black suit. When finished, one of the mysterious figures addressed her and said that she could come back from her trip.

Amy claimed to have woken up in a forest, completely lost, although luckily she managed to make it to the gas station.

Strange red, triangular marks appeared on his body, mostly on his thighs and heels. Also, the hair on her body had grown considerably, as if she had been away for a long time and not just half an hour. Analyzes showed that Amy had not been drinking alcohol and had not used any drugs.

Faced with this mysterious event, witnesses to the event contacted the Australian UFO Research Network and reported the case to ufologists Diane Harrison and Bill Chalker.

These experts studied the place where everything had taken place and conducted several interviews with the abductee to get to the bottom of the matter.

However, after contacting the investigators, Amy, Keith and Petra fled the area, as, according to them, they were experiencing a series of situations after the event that were not normal.

As Bill Chalker noted after speaking on the phone with witnesses: “In his call, Keith apologized for not being available, indicating that they had moved to another area after the incident. The main reason was that they were experiencing strange experiences throughout the days. Keith said “men in black” were chasing them in a speeding brown pickup truck. This event scared them so much that it prompted Keith and Amy to leave town.”

After the victims fled, the case was sold out and the clues could not lead to anything conclusive, and the nature of this event remains elusive to this day.