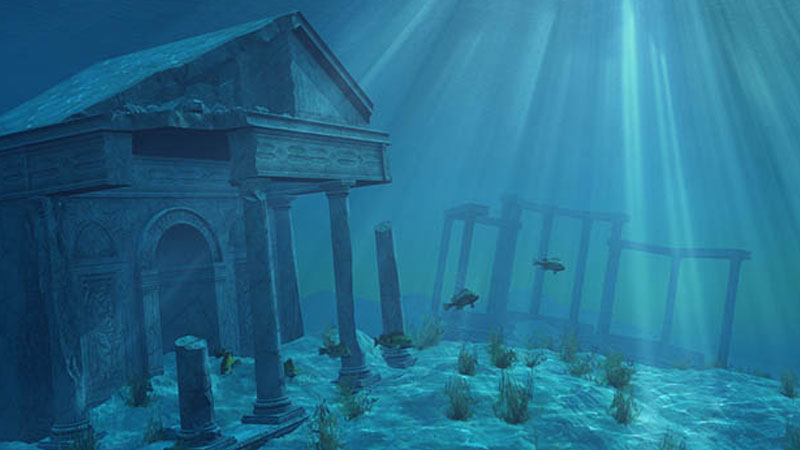 Atlantis is a mythological island, whose first mention is attributed to the Greek philosopher Plato in his works “Timaeus or Nature” and “Critias or Atlantis”.

In Plato’s tales, Atlantis was a naval power located “beyond the Pillars of Hercules”, which conquered many parts of Western Europe and Africa 9000 years before the age of Solon, approximately 9600 BC, and would have sunk into the ocean “in a single day and night of misfortune.”

From the Modern Age onwards, many researchers defended the real existence of the place, even going against all evidence.

The theories that exist around it are the most varied, although it remains to be seen if, in fact, any are correct.

Below are some of the theories about its possible location and mysterious disappearance.

Many historians have pointed out that Plato may have made a mistake in translating the numbers into Greek, putting the fall of Atlantis as thousands of years instead of hundreds.

If indeed Plato is wrong, both the temporary location of the island and the description of its size could indicate that it was the island of Crete, home to the Minoan civilization, which developed around 3000 BC and it was the first advanced European civilization, reaching a high degree of sophistication in various fields.

Historians have noted that the eruption of the volcano on the island of Thera (currently known as the island of Santorini) would have taken place between 1700 and 1600 BC, causing a tsunami that devastated the civilization in question, and it was this story that inspired Plato’s work.

Many hypotheses indicate that the island could be located in the North Sea, somewhere between Norway, Denmark, the British Isles, Germany, the Netherlands, Belgium and France.

However, in 2011, a team made up of researchers from National Geographic and the University of Hartford indicated that it could be located in southwestern Andalusia. This team’s speculation was later dismissed by Spanish experts, although the idea continues to spin.

Bearing in mind that the island’s name actually resembles the name of the ocean, there can be no shortage of theories that try to narrow down its pasts.

The Canary Islands, Madeira Island and the Azores Islands have often been suggested as possible candidates, but several studies have ruled out the fact that any of these islands spent time submerged, as Atlantis supposedly did.

A widespread theory suggests that Atlantis shifted, thanks to the movements of tectonic plates, towards what is now the region of Antarctica.

The theory in question was proposed in 1958, in the book “The Earth’s Shifting Crust”, by Charles Hapgood, an American academic and one of the best known proponents of the theory of shifting at the poles.

According to this hypothesis, the remains of the ancient civilization would be resting under miles of ice at the South Pole.

Spartel Island is currently submerged more than 60 meters deep, in the Strait of Gibraltar, which connects the Mediterranean Sea with the Atlantic Ocean, situated between the extreme south of Spain and the northwest of Africa.

The proposals are based on French studies that point out that although it is currently submerged, it could have been on the surface more than 10,000 years ago.

The investigation carried out by French experts suggests that the sinking of the island could have been caused by a large tsunami, inspiring many years later the catastrophe described by Plato.

The proposal that Atlantis was actually submerged in the Bermuda Triangle has been suggested by several authors and researchers, especially considering the mysticism that surrounds this geographic area and the supposed strange phenomena that happen in the region.

Although the Bermuda Triangle is generally linked to the existence of hundreds of mysterious species or civilizations, there is no strong indication that it is more than speculation.

The similarities between the shape of the island described with the American continent have inspired a theory that suggests that South America would be the island that Plato spoke of.

However, the continent would have been too large to have been Atlantis, although the theory has been bolstered by the similarities that some historians have found between descriptions of the Atlantis plains and the Bolivian highlands.

This is a sensitive question, although of dubious veracity, it is based on the work of the American psychic Edgar Cayce, who tried to merge the information provided by Plato with the belief that some Atlanteans would have survived the catastrophe.

Survivors’ characteristics would be blood type RH, red or orange hair, and light skin and eyes.

The descendants of this ancient civilization could have migrated to neighboring areas of Germany to later become the fervent representatives of Nazism and a race they considered superior to others.

The fact that Plato referred to this civilization as extremely advanced has made many people believe that perhaps it was simply an alien civilization that came to live on our planet, generating a lot of fascination and adding to the grandeur of the city.

The interesting thing would be to know if in fact the island was sunk by aliens who decided to emigrate to another planet, or if it ended up being submerged by natural causes, and in that case, the extraterrestrials who would have lived on the island managed to survive the catastrophe or would have also been victims, disappearing forever.

Are the Ancient Astronauts Still Out There?