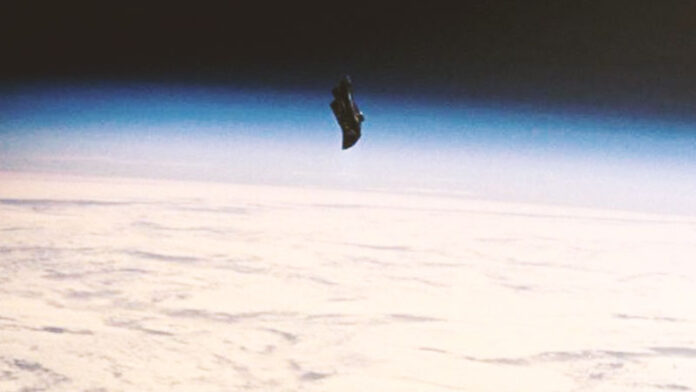 According to Nikola Tesla, the Black Knight Satellite should orbit our planet every 15 or 20 years collecting information about our civilization, effectively spying on us throughout the trip and, despite the fact that he talked constantly about it, Tesla was not able to attract attention to his discovery.

Only in 1954 occurred the first documented account of the sighting of the Black Knight, being reported by several newspapers.

At the time, astronomer Lincoln LaPaz of the University of New Mexico claimed to have seen something very large and extensive in space, and it is important to remember that at this time humanity did not yet have the technology to send objects into space and the first artificial satellite, Sputnik-1, was only launched into orbit in 1957, beginning the Space Race.

Later LaPaz and his assistant denied the incident, which led many to believe in the existence of a government conspiracy to conceal its existence.

This theory became even more popular in 1960, when the US and USSR would have in fact located what appeared to be a shipwreck in space. This happened on February 11, 1960, and the story gained even more status when Time Magazine stated that a “large dark object” was circling the Arctic Polar route.

At the time, the only two space potentials thought it was a military spy satellite, the Americans believing it belonged to the Russians and the Russians accusing the Americans, but the satellite did not belong to any of them. In addition, the few satellites at the time only surrounded the equator.

In 1961, the astronomer Jacques Vallee identify a giant object in earth’s orbit, he even claimed that he recorded the trajectory of the mysterious object, only to see his superior erase the evidence the next day. Valle was a student and friend of astronomer J. Allen Hynek of the Blue Book Project, and would later work together researching and writing books on ufology.

Two years later, in May 1963, one of NASA’s most experienced astronauts, Gordon Cooper, made the last flight of Project Mercury, prior to Apollo, where he broke all records of permanence in space, spending more than 34 hours in space and orbiting the Earth 22 times, when he saw a “floating black mass” while flying over the Australian city of Perth.

On the same day, about 100 people in Perth, Australia, claimed to have seen a large black object in the sky and reported to the authorities, at that time they still did not know of the testimony of the astronaut, which would only go public six months later.

NASA, however, rejected Cooper’s claims, claiming that it was all just the result of various technical problems, such as a loss of power that caused the internal temperature in the capsule to rise to 54° centigrade and carbon dioxide levels to rise, both in the cabin and in his pressurized suit, which would have caused him hallucinations.

At this point it is worth mentioning that like all other capsules of the Program Mercury, Cooper’s Faith 7 was built to be operated automatically and fully controlled from NASA’s command center, which reduced astronauts to mere passengers, a very controversial issue and criticized by the pilots of the time. But as the spacecraft’s electronics had failed, Cooper had to take over, for the first time in American space history, manual control of the capsule and, only guiding himself through the stars, accurately calculated the angle of re-entry into the atmosphere, triggering the retrorockets at the exact moment and the capsule landed safely at sea near the rescue ships. Incredibly Cooper performed all this unheard of and difficult procedure suffering from “carbon dioxide hallucinations”.

In 1974, it was the turn of astronomer Duncan Lunan to claim to have deciphered a coded message from the Black Knight, which contained a map informing the location of the civilization that controlled the extraterrestrial satellite and said that the artifact was intended to help humanity.

According to Lunan, the transmission had lasted 13,000 years and the map would point to Epsilon Boötis, a star in the Constellation of Boötes, about 210 light-years away from Earth.

Perhaps the greatest proof of the Black Knight’s existence, however, comes from nasa’s historic STS-88 space shuttle program mission in December 1998, which began construction in orbit of the International Space Station.

During this mission, space shuttle Endeavour captured a series of images of the Black Knight floating in space that were later removed from nasa’s website.

According to astronomer and former naval pilot David Bryant, who also claimed to have seen the Black Knight at the same time, the heads of the STS-88 mission deliberately erased all visual records of the satellite and audios between the crew and the Mission Control Center involving descriptions of the object, so that they were never released to the public.

NASA’s official theory is that it was just a thermal blanket that came loose from the Endeavour space shuttle.

Over time, many writers have also reported receiving telepathic messages from objects orbiting the Earth, among them stands out Aldous Huxley, the author of “Brave New World” written in 1932, who anticipates, almost prophetically, developments in reproductive technology, hypnopedia and psychological manipulation, in the way of a warning about the control of the society in the future.

Philip K. Dick also claimed to receive messages from a satellite around the Earth and referred to this entity as “VALIS” (Vast Active Living Intelligence System), which transferred information to him from other times and civilizations with great speed. Dick, in addition to being one of the most important futuristic science fiction writers of the 20th century, was constantly pursued by the FBI. Already in the 1950s he wrote about alternate realities and parallel universes, time travel, androids, artificial intelligence, powers of precognition, extraterrestrials and space colonization, and was responsible for the classics “Blade Runner” and “The Man in the High Castle”.

In 2016 the latest sighting may have been made to the Black Knight, a “large dark shape” was seen floating near the International Space Station and since then, no one has claimed to have seen the Black Knight again.

The Mysteries of the Ancient Sumerians