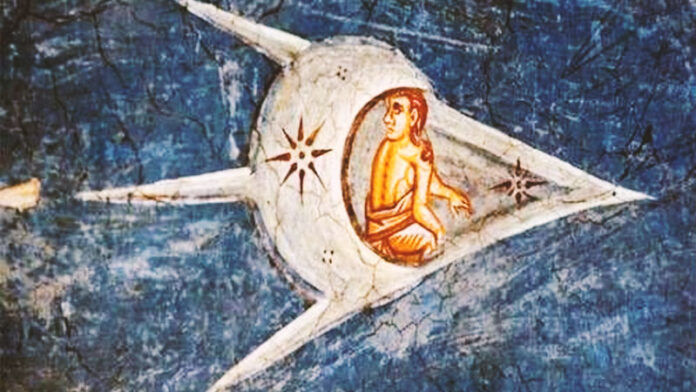 UFOs and strange figures that would look like space visitors are often found in cave paintings on cave walls around the planet, but these images also appear in classic pieces of art, especially those depicting divine events.

What would have led such artists to portray these enigmatic flying objects at a time when the pinnacle of technology, when it came to means of transport, was limited to simple carriages?

The figures above appear in the “Annales Laurissenses”, a French manuscript of the 12th century, in which it is detailed the siege of the Castle of Sigiburg in the year 776, by the Saxons.

In these texts, it is said that when the Saxon invaders had surrounded the fortress, a fleet of discs appeared in the sky, hovering over the church.

The Saxons understood the event as a kind of “heavenly protection” and decided to withdraw from the battle.

The Annunciation with Saint Emidius

Painted by the italian Carlo Crivelli in 1486, this work celebrates the proclamation of the Angel Gabriel to the Virgin Mary, who would give life to Jesus.

For the experts in paintings, the object from which the Ray of Light or Holy Spirit comes out, towards Mary’s head, is nothing more than a group of angels spinning in a circle around the clouds, but for the defenders of the UFO phenomenon, it depicts a flying saucer and the virgin mary’s contact with aliens and, according to this interpretation, Jesus could be an extraterrestrial.

The Baptism of Christ

This work by the dutch painter Aert De Gelder was made around 1710 and depicts the baptism of Jesus.

In the New Testament, in Matthew 3:16, we read, “As soon as Jesus was baptized, he went up out of the water. At that moment heaven was opened, and he saw the Spirit of God descending like a dove and alighting on him.”

The painting shows what appear to be columns of light coming from the sky and illuminating the scene, presumably sent by God, but it is believed that the dutch artist, Rembrandt’s disciple, has gained access to the secret archives of the Vatican Library and that Gelder’s paintings, especially this one, were ways the painter found of transmitting this secret knowledge to the public.

This work was painted in 1350 and is in the Visoki Decani Monastery in Kosovo, Serbia.

It shows the crucifixion of Jesus, but one can notice two strange flying objects next to Jesus, which carry human figures and would be, according to traditional experts, representations of the Sun (left) and the Moon (right), as a way to show the cycle of life, day and night, in a humanized way.

But according to UFO theorists, it is believed that these objects represent alien ships with their pilots dressed in space suits, and would be a useful way to reveal to the world humanity’s contact with aliens and perhaps even The extraterrestrial nature of Jesus itself.

Glorification of the Eucharist

Commissioned by the Church of San Pietro de Montalcino, this painting was made by the italian Ventura Salimbeni in 1595 and it is believed that it suggests the possibility of alien life or time travel.

The object of the controversy is one that lies between Jesus and God, and which has a format very similar to that of the russian satellite Sputnik, which gave began the space race in 1957, which led many to suggest that the artist could predict the future or have traveled through time.

Another theory suggests that the object could be some kind of Earth monitoring device by extraterrestrials.

Traditional historians say that the object is only the “Globe of Creation”, but, strangely, it seems to have a metallic finish and contains no evidence of land or continents, suggesting that it would be something artificial and not divine.

The Book of Good Manners

Some of the Christian virtues such as Chastity, Caution, Meekness, Justice, Moderation, Obedience, Diligence and Humility are depicted in “The Book of Good Manners” written by the frenchman Jacques Legrand in 1338.

The book is on display at the Condé Museum, housed in the historic Chantilly Castle in France and clearly the mysterious sphere in the center of the scene surrounded by other strange flying objects, is what arouses the controversy never explained.

There is a debate about who is the author of the above work, called “Madonna Col Bambino and San Giovannino”, in the original language.

The 15th-century painting is commonly attributed to Domenico Ghirlandaio, although some art historians consider Arcangelo di Jacopo del Sellaio and others Bastiano Mainardi as its creator.

The Renaissance painting, exhibited at Palazzo Vecchio in Florence, Italy, depicts Mary, mother of Jesus, looking at the two children, but in the background, one can see a clear picture of what appears to be a flying UFO, while a man blocks the sun with his hand and faces the strange flying object in the sky, demonstrating that said object might not be anything unusual at the time.

The Miracle of the Snow

The panel of the italian Renaissance painter Masolino da Panicale, made in the 15th century, depicts an event that became known as “The Miracle of the Snow”, an off-season snowfall, which occurred in Rome during the 4th century, on a summer day.

The image shows the population trying to understand what is happening, while Jesus and Mary observe everyone of what would be a large cloud, surrounded by dozens of other small clouds.

Ufologists believe that they are not clouds, but rather a fleet of extraterrestrial ships and argue that the objects would be part of the original story and would be responsible for the out-of-season snow.

Sudden temperature changes are associated with UFO sightings and there is a record of October 27, 1954, when numerous disc-shaped objects were reportedly sighted flying over the city of Florence, Italy, in the middle of the afternoon and their passage was followed by the fall of snowflakes.

The image belongs to the text “Prajnaparamita Sutra” (The Sutras of Perfection of Wisdom), translated in the 10th century from Sanskrit to Tibetan, and which is exhibited in a museum in Japan.

Originally written in India around the year 100 BC, the text refers to the perfected way of seeing the nature of reality, and one of its most important characteristics is the “nutpada”, a Buddhist concept for absence of origin.

The drawings contained in the book represent the Vimanas, a kind of two-story circular or cylindrical nave with lookouts and a dome. The text states that the object flew with “the speed of the wind” and gave rise to a “melodious sound”.

The italian Julius Obsequens was a writer from Ancient Rome, who lived in the 4th century and made a compilation called “Prodigiorum Liber” (The Book of Wonders), based on the work of Titus Livio, a roman historian, containing several texts that refer to extraordinary and supernatural events that occurred in the ancient Roman Empire between 249 BC and 12 BC.

The illustration belongs to a UFO sighting and the text reads, “Something like some kind of weapon, shimminous and golden, rose from the ground with great noise and fired toward the sky.”

In the mysterious and secret Vatican Library, there is a reliquary containing stones from Palestine from the 6th and 7th centuries.

What draws attention is that one of the several images that adorn the reliquary shows a representation of Mary in the tomb of Jesus and behind, a strange object appears with a dome from which emanates a beam of light.

The Land of Gung Ji

This is an ancient Chinese illustration of a book entitled “The Land of Gung Ji: Illustrated Study of Strange Countries”.

It was written around 1400 and contains cryptic passages like this: “People could blow the chariots that traveled far with the proper wind. In the days of Tarng (1700 BC.), the people of Gung Ji flew in a car heading west in Yew Jo. Tarng had dismantled his car so that it would not be shown to the people. Then came an eastwind in which he used to blow his car toward his own country (5,000 km) east of our lands.”

This tapestry was made in 1538 in Bruges, Belgium, and is currently on display at the National Museum of Bavaria, in Germany.

The piece appears to represent the rise of a ruler to power and shows several objects in the upper corners of the tapestry, shaped like saucers that appear to have domes, very similar to the reports of modern UFOs.

Since there are no known religious symbols that are similar to this, it is assumed that these objects do not symbolise something divine, and it is possible that the artist was recreating a phenomenon that he himself has observed.

Written in 1844, “Ume No Chiri” is one of three japanese texts that report the landing of a mysterious object, which was found drifting off the coast of Hitachi Province in eastern Japan in 1803. The other two texts are the “Shosetsu” of 1825 and the “Hyoryu Kishu” of 1835.

The illustration depicts the characteristics of the object that Japanese sailors found floating in the ocean.

From inside the “hollow boat”, as it was called, came out a woman, who did not speak Japanese, she then returned to her ship and disappeared into the sea, never being seen again.

For japanese folklorists, “Ume No Chiri” is just one of several legends about supernatural beings that permeate Japanese culture, but for ufologists it is evidence of extraterrestrial contact.

Life of the Virgin

In the Basilica of Beaune Notre Dame in Burgundy, France, built in the 12th century, there is an incredible tapestry, dating from the 15th century, in which you can enjoy various events in the life of the Virgin Mary.

The detail is in one of the images, on the left side of the upper corner, in which one notices a strange object, which resembles a UFO, flying over the city, just above the figure of three women of the period.

Are the Ancient Astronauts Still Out There?