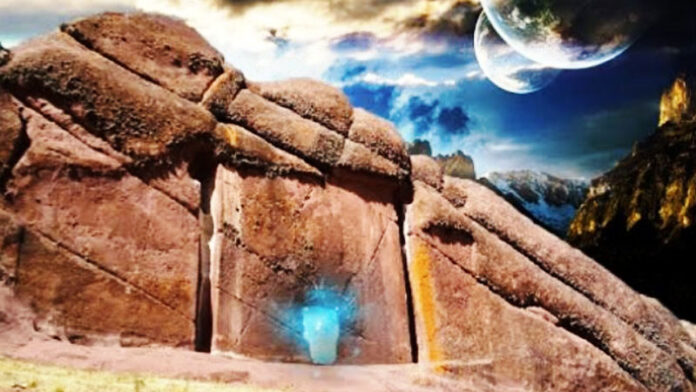 In the mountains of Peru there is a portal shrouded in mystery and attributed with abilities of mythical proportions.

Many ancient sites on Earth are believed to have special powers and emit unique frequencies of energy, lights or sounds that seem impossible. There are also stories of people, cities and even entire ships disappearing without a trace.

The City of the Gods, high in the mountains of Peru, is home to one of these Stargates. Due to the rocky mountainous terrain and the Peruvian government’s protection of the ancient archaeological site, it has remained unexplored.

Researchers are still unsure whether this area actually contained a settlement, but the rock formations bear an interesting resemblance to dwellings and structures.

The Gate of the Gods was discovered in 1996 by Jose Luis Delgado Mamani, a local tour guide who got to know the site while walking through the site to familiarize himself with the area. As he approached the huge portal, nestled in the rock formation, he was overcome with the impression that he had seen this portal before in his dreams.

For years, a pink marble portal, with a smaller door built in, from which emanated a mysterious blue light, presented itself to him as he slept, and the moment of discovery moved him to the point of fainting. Could this just be a fantastic coincidence?

The Legend of the Gate of the Gods

The native peoples of Lake Titicaca, Panu and the rest of the surrounding region have long recounted a myth about a mysterious portal that led to the “land of the Gods”. Heroes of ancient times have been witnessed entering the beyond through this door to join their deities, once their time on this earth has come to an end.

Legend also mentions these same great men returning through the same portal with their gods by their side, to check on the lives of those they had left behind. There is also talk of a prophecy: “Someday in the future, the portal will open, much larger than it really is, and allow the gods to return in their solar vessels.”

All this, and much more, crossed Jose Mamani’s mind as he saw this magnificent structure, out of his dreams, for the first time.

This portal was carved into the rock face, 7 meters high by 7 meters wide, with a smaller door inserted into the base. In the center of the smaller door is a circular depression, and it was soon discovered that this alluded to another myth involving an ancient Inca priest fleeing the Spanish conquerors.

The Inca priest Amaru Ramu of the Temple of the Seven Rays took the precious golden disc, known as “the key of the gods of the seven rays”, when the conquerors arrived to plunder the temple, and fled to the mountains of Hayu Marca.

There he found the Gate of the Gods, under the protection of the shamans. The priest noticed that the golden disc fitted perfectly into the depression molded into the smaller door and the shamans would have looked on in awe as the portal opened. Pale blue light bathed the reddish rocks as it opened. So that the golden key would not be lost, the priest abandoned it in the care of the shamans and passed through the portal, never to be seen again.

As soon as he recognized the portal of his dreams, Jose Mamani immediately contacted archeology experts in the nearby villages of La Paz, Puno and Lima, and within hours the place was filled with historians and scientists who were familiar with local legends.

Despite claims that the portal leads to other worlds, either leading to various tunnels sheltered within the mountain or capable of transporting humans and other beings to other dimensions, scientists have remained skeptical.

The portal appeared carved like a structure in rock, with no gaps to indicate it was a visible door.

According to some of the researchers, when they placed their hands on the door, they could feel a subtle energy pulsing from within. Some heard strange rhythmic music. Others claimed they saw visions of pillars of fire and things beyond this world.

What impressed the scientists most was that the massive door bore a striking resemblance to another structure attributed to the Stargate’s capabilities. The Gate of the Sun, in Tiwanaku, Bolivia, as well as five other archaeological sites, all connected in a grid pattern, whose lines intersect exactly where the plateau and Lake Titicaca are located.

Most of these constructions still remain unexplained by modern science.

Whether alien portals to alternate universes, passageways through which gods can reappear and humans can disappear, or simply an ancient structure designed for rituals and worship, these strange formations continue to fascinate and intrigue us, even thousands of years after their construction.