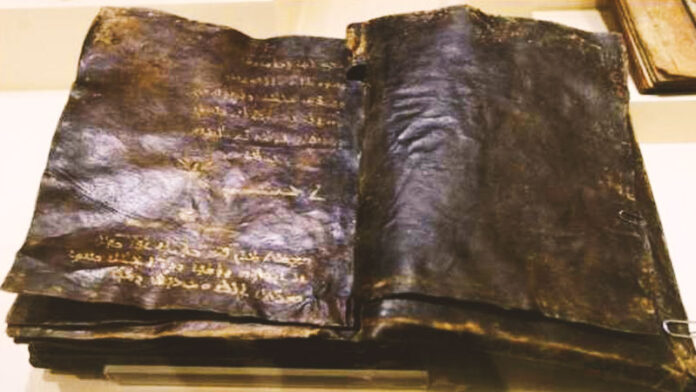 Although many people are unaware of its existence, the so-called Kolbrin Bible tells the story of ancient events forgotten by mankind.

It is the only document of its kind that still exists and has been preserved thanks to the fact that it was written on thin bronze sheets and tells the whole story of human genesis, from the first people who set foot on earth, before Adam and Eve, to the great Egyptian rulers.

The first part contains the history of creation, from the first people who set foot on our planet before Adam and Eve to the great Egyptian emperors.

The second part clearly reveals the interest of the ancient druids in astronomy and mathematics. The Celts have incorporated much of their knowledge into this book, especially in the fields of astronomy, medicine, religion, mathematics and oratory. Biblical facts and past global cataclysms are also narrated, and kolbrin’s last two books are dedicated to Jesus.

Genesis According to the Kolbrin Bible

The Kolbrin Bible speaks in a much more specific way about the disasters that occurred on our planet long before Adam and Eve, and also refer to the “fallen angels” who had children with the descendants of Adam and Eve, and who in this text are described as “mortal men” called “heavenly men.”

These beings formed societies much more advanced than ordinary ones and this made them survive the world’s first cataclysms by hiding in underground shelters.

According to this text, the human being is descended from a much more intelligent and evolved race, the so-called “sons of God”, the first survivors of the great initial cataclysms through which our world passed, and these men married the daughters of Adam and Eve and had children.

Kolbrin researchers believe that these advanced societies could be Atlantis and Lemuria, the legendary civilizations believed to have ended after an impending catastrophe caused by the wicked acts performed by these beings.

“Then, with dawn, the men saw an impressive spectacle. There, riding a rolled black cloud, the Destroyer appeared, newly delivered from the confines of the celestial vaults, and discharged his wrath into the heavens, for it was the day of judgment. The beast opened his mouth and belching fire and hot stones and dirty smoke. The whole sky was covered and the meeting point between Earth and Heaven could no longer be seen. At night, the stars changed places, rolled through the sky to the new seasons and then the floods arrived. The windows of the heavens opened and the foundations of the Earth were detached. The waters poured over the earth and broke through the mountains. Storms and swirls have been unleashed on Earth. In the strong winds of boiling water, all the buildings were destroyed, the trees were uprooted and thrown into the mountains. There was a moment of great heat and then a bitter cold. Huge boiling waves rose and fell and rotated, causing a terrible roar.”

This translation of the text offers a unique perspective on a series of events that can be found in different sacred books of all ancient cultures around the world.

The Kolbrin Bible was kept for many years in the Library of Alexandria. Founded in the 3rd century BC, was the largest library in the world at the time, containing more than 700,000 priceless scrolls.

The Library of Alexandria suffered a major fire in the year 48 BC, when Emperor Julius Caesar attacked the city.

Some researchers believe that the Kolbrin Bible was saved by Joseph of Arimathea, who managed to rescue the Kolbrin Bible along with some other scrolls that were in the library. The rescued documents were transferred to Judea and later to Britain, where it remains hidden and protected at Glastonbury Abbey due to its great value.

In the year 1184 a mysterious fire devastated the abbey, but the text remained intact and was preserved because it was written on bronze sheets and stored in a box coated with copper.