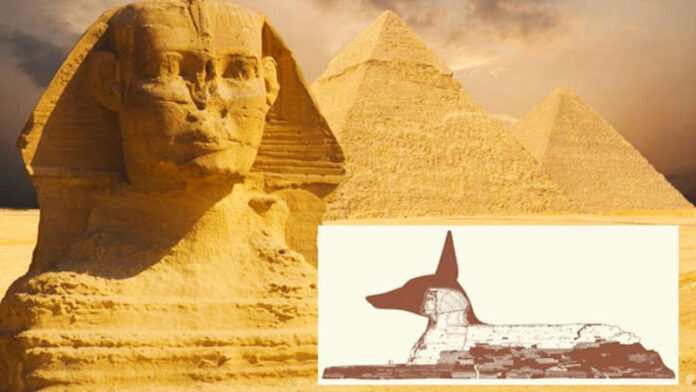 According to legend, the Sphinx guards the tombs of Egypt’s great pharaohs and has been doing this since 2500 BC. However, in recent times, there has been much debate around the origins and nature of this statue.

Some say that the erosion patterns actually indicate that the Sphinx was built hundreds, if not thousands of years earlier.

Others suggest that the Sphinx’s head, strangely disproportionate to the body, indicates that originally the statue was of a lion or, perhaps, even of the Egyptian god Anubis, who guided and guided the souls of the dead in the underworld, and was always represented with the head of a dog or jackal.

As no one can know the truth for sure, the mystery of the Sphinx remains.

The sphinx is a well-known figure in Greek and Egyptian mythology. It is typically portrayed as having the head of a man, the body of a lion, and the wings of an eagle.

A sphinx can be male or female, but she is always cunning and ruthless. Usually, in myths, the sphinx makes riddles, and if a person answered incorrectly, he was devoured.

Sometimes, the sphinx terrorized a village, as in the case of the sphinx of Thebes, which according to the famous legend, would have terrified the people by demanding the answer to a riddle taught by the Muses: “What animal walks on all fours in the morning, in the afternoon? about two and the night about three?”, and devoured all who were unable to answer correctly. Finally, Oedipus gave the appropriate answer: “the man”, for he crawls on all fours in childhood, walks on two feet as an adult and leans on a staff or cane in old age. The sphinx, frustrated, then threw herself off a cliff and perished.

On other occasions, such as in the Great Sphinx of Giza, the creature is said to guard something and will not let anyone through unless it correctly answers a riddle.

Who built the Sphinx of Giza?

Traditional archeology states that the Sphinx of Giza was built during the Fourth Dynasty of the Ancient Kingdom of Egypt, under the reign of Pharaoh Khafra, possibly around 2558 BC until 2532 BC, the same time the Great Pyramids were being built.

The statue’s face should have been made in the image of Pharaoh. However, one cannot help but be confused by the disproportionate appearance of a tiny head on top of such a gigantic body.

But if there’s one thing we know about the ancient Egyptians and their statues, it’s that they always got the proportions right. In fact, we could say that they were extremely obsessed with correct proportions in everything. So why would they have carved what, to this day, is the world’s largest stone statue with the wrong proportions?

Also, the Sphinx’s face does not look like other representations of Pharaoh Khafra.

Known depictions of Chephren in statues and that of the Sphinx reveal many differences, although one could argue that the sculptors got Chephren’s features slightly wrong because of the uniqueness, scale, and challenge of working the rock, rather than the much smaller scale. already successfully tested on their statues, some of which have been recovered from the Valley Temple next to the Sphinx.

Some say the Sphinx is more similar to the style of Pharaoh Cheops, father of Khafra, and thus was built sometime in his reign. Others argue that it was built by the other son of Cheops and brother of Chephren, the little-known Pharaoh Djedefre, in honor of his father.

The Sphinx as a Giant Lion

However, none of these theories explain the shocking and disproportionate nature of the sphinx’s head. Historical architect Dr. Jonathan Foyle said that “the head and body are totally disproportionate, and the reason for that could be that the Sphinx originally had a totally different head, perhaps that of a lion. For the early Egyptians, the lion was a symbol of power, far more powerful than a human face.”

At this point in history, lions still inhabited and around Giza. Whether due to erosion of soft limestone or for political reasons, proponents of the lion’s head theory argue that the Great Sphinx was reshaped to have the face of man, possibly that of a pharaoh, an act that reduced significantly the overall size of its head.

Anubis: The Egyptian God of the Dead

Another theory, a little less supported but much more interesting, holds that the Great Sphinx’s head was originally that of an animal, but not a lion. And it could be a dog or a jackal, an animal that represented the Egyptian god of the dead, Anubis.

As researcher and author Robert Temple explain: “The Sphinx’s body is not feline, as lions are known for their curved back and possessing a mane, absent in the Sphinx, instead the body is much more similar in shape to that of a crouching dog”.

There is a lot of circumstantial evidence to support this theory, one of which is that Anubis is the god of the dead, and he is believed to protect them and prevent the unworthy from crossing the Nile River into the underworld, the same role played by the watchdog Cerberus, in Greek Mythology.

According to the Book of the Dead, a statue of Anubis was used in funeral rites, specifically in washing the parts of the deceased body, which were placed in the four canopic jars, and this would also explain that the Sphinx’s location may have been a moat filled with water, used for the ritual washing of the pharaoh’s body.

Finally, the best-known image of the Egyptian god is the Statue of Anubis, found inside the tomb of King Tutankhamun, which shows him as a crouching dog. If the statue’s head was originally that of a pointed-eared dog or jackal, as Anubis is often portrayed, then the notion holds that its construction may be much older than imagined and erosion could have ruined its ears. and maybe its muzzle. Then the Pharaoh sought to restore the statue and reshape it to have a man’s head, transforming it into the popular mythical figure, the Sphinx.

The Advanced Scientific and Technological Knowledge of the Ancient Indian Sages