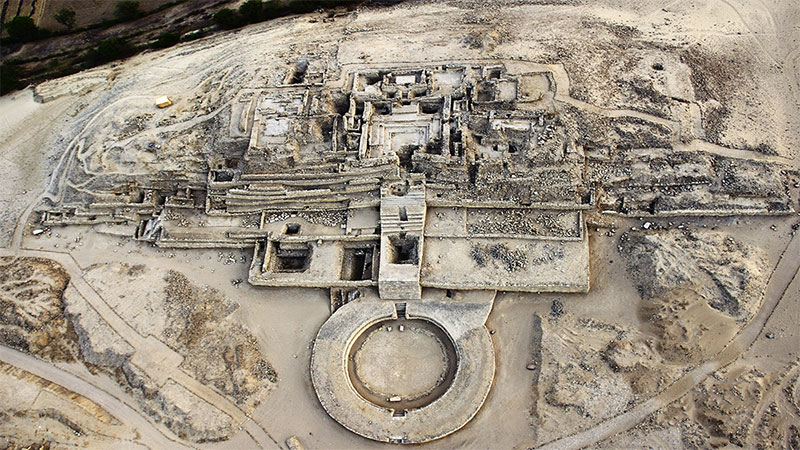 Called the “cradle of western civilization”, the ancient city of Caral in Peru is known for its pyramids, which represent one of the greatest discoveries in the world.

Although they are more worn out by time and less impressive than other pyramids in the world, they are no less significant historically and their discovery offers new deductions about the history of the Americas.

Caral is located about 200 kilometers north of the peruvian capital Lima, in the Region of Barranca, near the central coast and its pyramids are built on the fertile terrace of Supe Puerto, surrounded by the desert.

The antiquity of the Holy City of Caral was confirmed through C-14 carbon dating, held in the United States. According to this, the city of Caral was dated between the years 2627 and 2100 BC, while in the rest of America, urban development began only 1500 years later.

Their discovery changes the theories that until now existed about the emergence of the ancient civilizations of Peru. Until recently Chavín de Huántar was considered the oldest cultural focus in the country, dating 1500 years BC.

The Pyramids of Caral were built approximately 5000 years ago, being previous to the Inca pyramids in about 4000 years.

Built in stone, its design shows a complex and advanced architectural understanding. Like other pyramids in history, Caral pyramids are believed to have religious significance and were used in city meetings and celebrations.

The most prominent monumental buildings are:

At the foot of the Great Pyramid and the Temple of the Amphitheater were built large circular squares, meeting spaces for the inhabitants of the city, where activities were probably carried out accompanied by the music of transverse flutes and cornetins.

The 32 pyramidal structures found, one of them 18 meters high (59 ft.), coincide with the date when Egyptian civilization was building its own.

The inhabitants of Caral made up an agricultural society, which produced bean, pumpkin and cotton crops. They had a complex and efficient irrigation system, which allowed them to cultivate large quantities and trade with neighboring peoples.

The inhabitants of Caral did not have a written language, but communicated through messages with an intertwined string system, as the Incas did.

Caral was abandoned around 2100 BC for unknown reasons, but it is believed that she suffered from droughts, hunger and disease and its inhabitants would have abandoned the city by dispersing through Peru and mixing with other existing cultures.

Caral was discovered in 1905, but as no valuable treasures or ceramics were found, the idea of exploring the city was abandoned until 1941, when a team of archaeologists carried out a large-scale exploration.

However, the deteriorating state of the pyramids led the team to believe that they were simply natural mounds of sand and also abandoned their destiture.

The area was not explored again until 1997, when its remarkable age was verified and its consequent historical significance was determined.