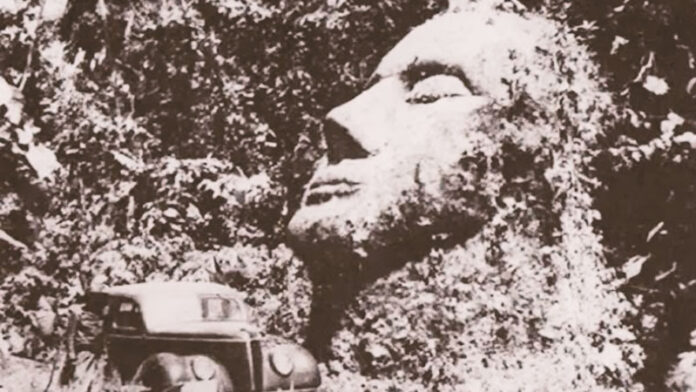 News of the discovery first came when lawyer and philosophy doctor Oscar Rafael Padilla Lara received a photograph in 1987 along with the description that it had been taken from him in the 1950s by the owner of the land where the intriguing and gigantic stone head was found in the jungles of Guatemala.

The face pointed to the sky and had thin features and lips and a large nose, presenting Caucasian features that were not consistent with any of america’s pre-Hispanic races such as the Aztecs, the Mayas, or any other known civilization.

The discovery quickly attracted attention, but with the same rapidity fell into the forgotten pages of history.

A short article published in the “Ancient Skies” newsletter showed the photograph and told the story of the discovery, which was read by researcher and author David Hatcher Childress who then began a search for more information about the mysterious stone head.

Childress managed to contact Dr. Padilla, who reported having found the Biener family, the owners of the property where the monument was found, in a small village in La Democracia, southern Guatemala.

Unfortunately, when Dr. Padilla arrived on the scene, he discovered that the stone head had been destroyed:

“We located the statue too late. It had been destroyed about ten years ago when it was used as a target shot by rebel groups. This totally disfigured her, her eyes, nose and mouth completely disappeared”, said Dr. Padilla.

After estimating the height of the stone head between 4 and 6 meters, Dr. Padilla no longer returned to the site due to the dangers of attacks by rebel groups in the area.

The destruction of the head meant the end of the story until it was resumed a few years ago by filmmaker Raul Julia-Levy, son of actor Raul Julia, who produced the documentary “Revelations of the Mayans: 2012 and Beyond” and used the photograph of the stone head in order to claim that extraterrestrials had contact with past civilizations.

Raul Julia-Levy published a document written by Guatemalan archaeologist Hector E. Majia wrote: “I certify that this monument has no characteristics of the Maya, Nahuatl, Olmecs or any other pre-Hispanic civilization. It was created by an extraordinary and superior civilization with incredible knowledge, of which there is no record of existence on this planet.”

However, the documentary ended up producing a contrary effect, being accused of a mere publicity stunt by skeptics who questioned even the statements of the archaeologist, the case was once again forgotten on the page of history.

However, it seems that the giant head existed and there is no evidence to suggest that the original photograph or Dr. Padilla’s account is false.

The region where the stone head was found in Guatemala is actually already famous for other giant stone heads found in the jungle. It is known that these other heads were created by the Olmec Civilization, which flourished between 1400 BC and 400 BC.

The Olmec civilization prospered in the lowlands of the Gulf of Mexico. However, Olmec-style artifacts, monuments and iconography are found in a vast area, including La Democracia, Guatemala.

However, the stone head depicted in the 1950s photograph does not share the same characteristics or style as the Olmec heads. Phillip Coppens, Belgian author, radio presenter and TV commentator on alternative history issues, raised the question of whether the head “would be an anomaly of the Olmec period, or part of another unknown previous or later culture, whose only artifact identified so far is Padilla’s head.”

Other questions that were posed include whether the structure was just a head, or whether there was a body underneath, such as the Easter Island statues, and whether the stone head is attached to any other structure in the region.

These theories have never been proven by the lack of exploration and research on the site, discouraged by local conflicts. A team of amateur archaeologists exploring olmec heads in 2018 has disappeared without a trace.

We only have hope that an ambitious explorer will resume this incredible story and investigate thoroughly to discover the truth about this enigmatic monument.