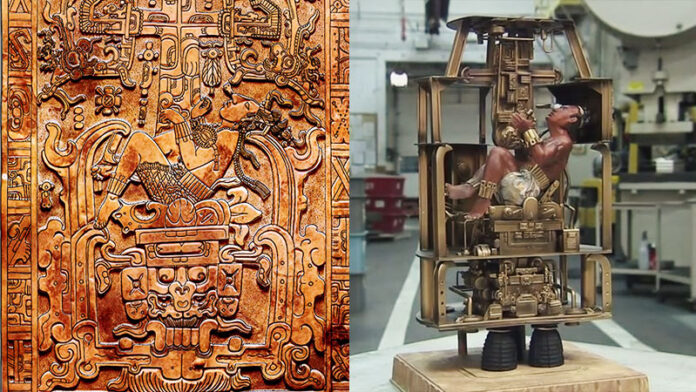 In the year 683, at the height of the Mayan Civilization, there was a large city in the middle of the jungle, ruled by a great king named Pakal, who lived until the advanced age of 80.

Under his rule, the city now known as Palenque, whose Mayan name was Ba-ak Lakamha, flourished and immense monuments were built, among them a pyramidal structure called temple of inscriptions, which archaeologists discovered in the 1950s.

And what they found inside the temple was surprising: a sarcophagus about 4 meters long, 2 meters wide and 1 meter high, covered by a gigantic stone plate, weighing more than a ton, which protected and adorned the tomb of King Pakal.

On the surface of this slab archaeologists find a curious illustration, which since its discovery, has been the center of controversy and interpreted in two very different ways.

A field that began after the 1960s, with the Space Race and the development of rockets and space equipment, believes that this carved relief is proof of alien visitation, because it would clearly show a person inside a spaceship, while traditional archaeologists believe that this is a common funeral illustration and that there is nothing but a beautifully carved work of art by hand so many centuries ago, which represents the Tree of Life and King Pakal’s journey to the underworld.

The City of Palenque

Palenque was discovered in 1773 by Spanish explorers who came in search of woods and, as they began exploring the region, noticed that the woods were on top of ancient buildings.

Archaeological research was only begun in 1950 and to date only 10% of the archaeological site of Palenque has been excavated, more than 500 buildings have been identified, but have not yet been fully explored due to the dense growth of the forest, and some argue that King Pakal’s tomb would be only the first of many representations of “astronauts” not yet discovered.

To this day the city of Palenque is soured by mysteries, no one knows its real age and it is assumed that its first recorded ruler reigned in 2325 BC, but many archaeologists consider him a mythological king.

The city’s heyday began around the year 400, when Palenque was home to tens of thousands of people and a powerful aristocracy until its mysterious collapse between the 800s and 900s, which caused the city to be abandoned.

The Ancient Astronaut Theory became popular in the 1960s and 1970s with the books by Erich von Daniken and Alan Landsburg, and proposes alternative views to traditional archaeology, believing that extraterrestrial beings have been visiting earth for millennia, and that humans have had contact and learned advanced techniques from these beings in antiquity or even prehistory.

Ancient Astronaut theorists point to the breathing apparatus under King Pakal’s nose, while his feet are on a type of pedal that could be used to maneuver the spacecraft, leaving his hands free to operate a control panel and an engine dropping flames of fire can also be observed under the pilot’s seat.

And this is not a unique artifact, another sculpture of the Mayan Civilization reminds us of a modern astronaut.

He is shown wearing a helmet with a visor and a built-in communication panel, with breathing apparatus attached to his chest and strangely resembles modern-day space travelers.

The Ancient Astronaut Theory proposes the explanation that in ancient times, in this tropical jungle of America, there may have been a group of intelligent beings from other planets, who descended from the skies on their spaceships and lived with the Mayans, teaching them knowledge about astronomy, agriculture and architecture, showed them their space vehicles and then left , but before leaving they left a message promising that one day they would return.