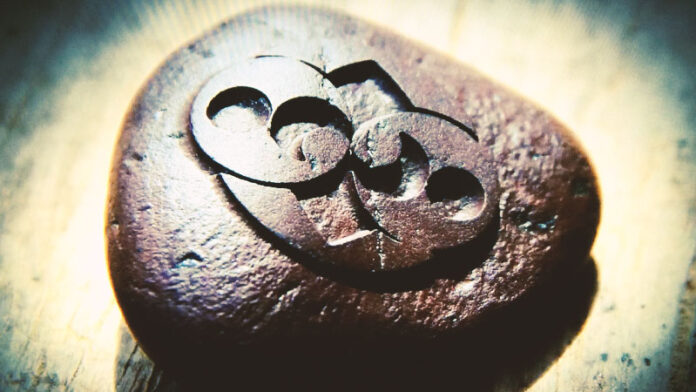 The intriguing object known as “The Roswell Rock” has created much confusion among those who have studied it, because in addition to possessing mysterious properties, many believe that the curious artifact may belong to an extraterrestrial race that visited Earth.

On September 4, 2004, Robert Ridge was hunting in the New Mexico desert, and while exploring the territory near the site of Roswell’s UFO crash, he came across a strange object partially buried in the ground, with a curious pattern carved on its surface. After cleaning it, he noticed a set of patterns and symbols on its surface that immediately caught his eye.

The Roswell Rock has carvings of two circles and two crescent moons joined in the corners, a pattern characteristic of those that tend to appear in the Crop Circles, strangely similar to a circle that appeared on a plantation in Liddington, England, on August 2, 1996.

As the mysterious artifact has been discovered near the site of the UFO crash at Roswell, it has been suggested that the Roswell Rock could have been left behind by extraterrestrial visitors or even be an unrecovered part of the ship that crashed in the american desert.

In order to learn more about the object, Robert Ridge contacted ufologists Chuck Zukowski and Debbie Ziegelmeyer. At first they realized that the color of the rock was the same as the carved surface, so they assumed it was not a recent work.

After studying the artifact under the microscope, the researchers were unable to find tool marks that would have been used to make the engraving.

In addition, the researchers found that Roswell Rock had magnetic properties that attracted the needle of a compass and rotated in the presence of a magnet.

When a magnet is placed on the thickest part of the Roswell Rock, the object rotates counterclockwise. However, when it is placed above the engravings of the lower crescent and circle, the object reverses and rotates clockwise.

In addition, the analysis of the Energy Dispersive Fluorescence Spectrometer confirmed the presence of a strange type of iron material that does not occur naturally.

Many believe that symmetrical engraving on Roswell Rock can point to the existence of parallel universes, and its strange magnetic properties may offer clues about free energy, dimensional portals and wormholes that we have not yet found.