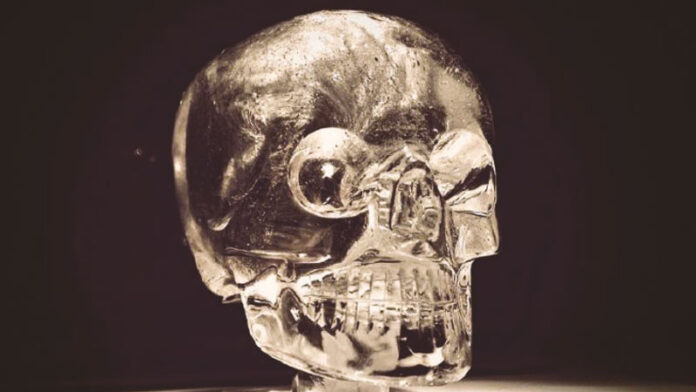 There are at least 13 “Crystal Skulls” that have been found and spread around the world among museums and private collections. Some of the skulls are life-size, while others are miniatures, but all have provoked great enthusiasm in the archaeological community.

Some have suggested that the artifacts came from cultures that would have survived the collapse of the lost city of Atlantis and migrated to Central America, others are of the opinion that they were left behind by aliens who visited Earth long before recorded history and contains vital information that will one day be revealed to the human species , while traditional archaeologists prefer to say that the skulls were made by Victorian artists.

Although Crystal Skulls vary in size, all are carved from a single piece of quartz, a type of mineral known for its piezoelectric properties, which when subjected to pressure generate electrical charges, and more recently it has been discovered that this type of crystal can store massive amounts of data and information for billions of years without loss of quality.

A small piece of quartz the size of a coin is capable of storing 360 Terabytes of data, and the crystal is so resistant that it would take up to 13.8 billion years to decommin at temperatures of 190 degrees Centigrade. In fact, some historical documents have already been stored using this technique, including books such as the Magna Carta, the Universal Declaration of Human Rights and a version of the Holy Bible.

“It’s exciting to think that we’ve created a document that will probably survive the human species. This technology can guarantee the latest evidence of civilization: everything we learn will not be forgotten,” says Peter Kazansky, professor and supervisor of the quartz storage research group at the University of Southampton in the UK.

Of all the Crystal Skulls found, the “Skull of Doom” discovered by British explorer Mitchell-Hedges remains the most mysterious and intriguing of all.

Battling the heat of the dense jungle, insects and moisture, British adventurer Frederick Mitchell-Hedges crossed the Yucatan Peninsula in 1924, along with his daughter Anna and the rest of his expedition, towards an ancient Mayan city.

Suddenly, the team spotted an ancient Mayan pyramid. The adventurers slowly made their way through the jungle, and while examining the ruins of the Mayan City of Lubaantun, Mitchell-Hedges’ daughter Anna found a bright crystal skull, reflecting the scattering of light.

The skull looked so out of place, so advanced in its design and cleverly carved, that it stood out amid the ruins of ancient stones.

Formed from a single solid piece of transparent quartz, the adventurer and his daughter immediately realized that they had bumped into one of the most mysterious objects in the history of archeology.

Mitchell-Hedges wrote about the Crystal Skull in his 1954 memoir, entitled “Danger My Ally”, in which he refers to the artifact as the “Skull of Doom”, stating that “several people who laughed cynically at it had mysterious accidents or became seriously ill” and that the skull dated “at least 3,600 years ago, and took about 150 years to be made, rubbing with sanda block of pure rock crystal” .

After Frederick Mitchell-Hedges’ death in 1959, his daughter Anna took the skull for further studies and hired the services of art restorer Frank Dorland, who said he heard music and sounds of bells emanating from the skull. Anna also claimed that the skull possessed healing powers.

The Authenticity of the Artifact

Before Mitchell-Hedges’ skull, there was a similar artifact that was exhibited at the British Museum. This particular skull first appeared in 1881 in an antique shop in Paris, which was taken to America and auctioned in 1886, and later sold to the British Museum in 1898.

The museum put it on display and labeled it as having come from pre-Columbian Mexico, bearing a striking resemblance to the “Skull of Doom”, but with less detail.

In 1992, a mysterious package arrived at the Smithsonian Institute’s National Museum of Natural History. Inside it was a milky white crystal shaped like a human skull. An anonymous note attached read: “This is an Aztec crystal skull, supposedly part of Porfirio Díaz’s collection, was purchased in Mexico in 1960. I’m offering to the Smithsonian as a donation.”

All of these objects, including Mitchell-Hedges’ skull, were passed on to Jane MacLaren Walsh, an anthropologist and pre-Columbian art expert.

Walsh and his team, using electron microscopes, were able to show that the carving marks were made by tools not available to the Aztecs or Mayans. However, even though they were unable to determine a date for the manufacture of the objects, they stated that the engraved marks were probably made by a spinning wheel of jeweler. Other tests revealed that quartz came from Brazil or Madagascar and not from Central America, further adding to the mystery surrounding the intriguing artifacts.

According to National Geographic: “many believe that these skulls were carved thousands or even tens of thousands years ago by an ancient Mesoamerican civilization. Others think they may be relics of the legendary island of Atlantis or proof that extraterrestrials visited the Aztecs some time before the Spanish conquest. And since there is currently no way to accurately determine the age of such inorganic objects, the mystery will likely continue.”

Another Crystal Skull was found by a Guatemalan family in 1909, who remained in his possession until 1991, when the artifact was sold to a Dutch woman named Joky van Dieten, who describes herself as a “spiritual adventurer”. The skull was nicknamed “ET” in honor of the extraterrestrial from Steven Spielberg’s movie, and according to her, this skull has no terrestrial origin and could have come from the Pleiades star cluster, 444 light-years away from Earth. Joky van Dieten transports “ET” around the world to demonstrate its ability to cure diseases.

“SHA NA RA” is another Quartz Crystal Skull discovered in Mexico in 1995. Its current guardian is Michele Nocerino from Portland, USA. It states that the skull possesses incredible hidden powers that can open resonance fields in dream worlds, communicate knowledge, establish paths to the unconscious, open portals to other dimensions and has the ability to stimulate healing.