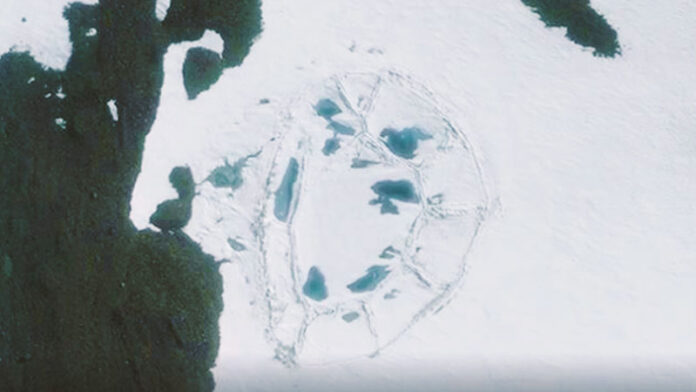 Located in the middle of East Antarctica, a strange oval-shaped structure measuring 120 meters (390 ft.) in width may be one of the definitive evidences that ancient civilizations once roamed Antarctica.

We all know that ancient civilizations around the world were, in fact, much more advanced than leading researchers believe, and numerous maps discovered in the past indicate that the story told by scholars today is incomplete, and there are several missing links in our history.

These ancient maps, in combination with modern satellite images of our planet, are perhaps the definitive proof that a civilization could have developed, in the distant past, in places that are now considered the most inhospitable on Earth.

Numerous structures have already been identified in recent years through satellite imagery and have revealed several strange formations that are scattered across the icy continent.

While some of them can easily be explained as natural geological formations, some remain unexplained and question everything we know about Antarctica.

There are several ancient maps that depict parts of Antarctica without its ice sheet, the most controversial of which is undoubtedly the map made by the Turkish navigator Piri Reis in 1513.

According to the navigator’s diaries, his map was drawn from older ones, including maps that were believed to have been destroyed during the fire of the Library of Alexandria, in the year 640 AD, and copies of maps that were in possession of the navigator Christopher Columbus, who would have used them to reach America.

The most intriguing factor of the Piri Reis map is that it shows what appears to be the continent of Antarctica, which was only officially discovered in 1820.

In 2012, a satellite image of Antarctica was identified that showed a strange oval formation in one of the most remote places on the planet. The strange structure raised numerous questions among experts.

Its unusual shape suggests it may be a man-made formation. Looking at the image, we immediately notice how the rings resemble a crumbling structure that has been covered by snow and ice.

Ashoka Tripathi, an archaeologist at the University of Calcutta’s Department of Archeology, said the images show clear evidence of an ancient human settlement under the ice sheet.

“These are clearly features of some sort of man-made structure, similar to a sort of pyramid structure. The patterns show nothing that we should expect from natural geomorphological formations found in nature. We have evidence of human engineering here. The only problem is that these photos were taken with a layer of at least 2 kilometers of ice covering Antarctica. We have no explanation for this at the moment,” says Tripathi.

Although the structure may have been man-made, experts initially thought the find could be a “sastrugi”, a natural phenomenon formed by years of strong, freezing winds and blizzards. But sastrugi are not known to form as shown in the image, these formations occur parallel to the wind direction and do not tend to create nearly perfectly shaped oval structures.

Some people claim that the intriguing formation may be a vestige of an ancient human settlement beneath the ice, and that the frozen continent is actually home to the fabled Lost City of Atlantis, which was first mentioned by the Greek philosopher Plato, in 360 BC

A widespread theory suggests that Atlantis shifted, thanks to the movements of the tectonic plates, towards the south, which is now the region of Antarctica. This theory was proposed in 1958 by the American academic Charles Hapgood, one of the best known proponents of the theory of change at the poles.

According to this hypothesis, the remains of the ancient Atlantean civilization would be resting under kilometers of ice at the South Pole.

The mysterious find has also been linked to ancient ruins found in South Africa, due to the noticeable similarities in their shape.

These African ruins are surrounded by several gold mines that would be extremely old and, according to the Ancient Astronaut Theory, match African legends and Sumerian texts about the Anunnaki beings, an extraterrestrial civilization that came to Earth to mine gold and precious stones. , and would have created settlements in different parts of the world and maintained contact with primitive human beings.

Researchers believe that these ancient Anunnaki cities could have been built between 200,000 and 400,000 years ago.