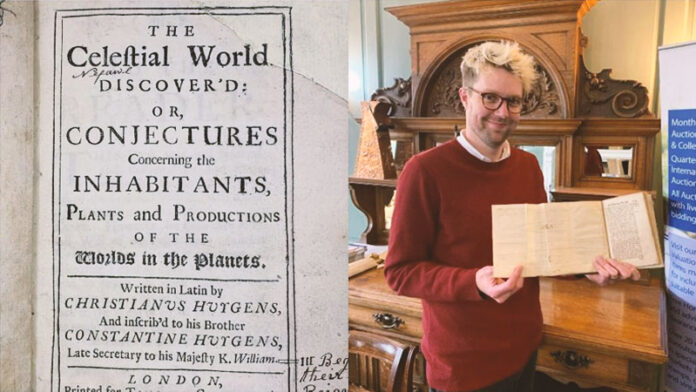 A rare edition published in 1698, was found at an antiquities appraisal event in Moreton-in-Marsh, England, by book valuer Jim Spencer, who said its contents appeared “an other-worldly find”.

The book was written by Christiaan Huygens, a physicist, mathematician and astronomer well known for his work on light, colors and sound, shortly before his death in 1695, and explores his fascination with the potential existence of extraterrestrial beings and details his ideas about it. of life on other planets, which he imagines is similar to that found on Earth.

Entitled “The Celestial World Discovered: Or, Conjectures About the Inhabitants, Plants and Productions of the Worlds on the Planets”, raises the question why God would have created other planets if it weren’t to serve a greater purpose than just being admired from Earth.

Knowing that his ideas could be accused of being in conflict with the Bible, Huygens argued that extraterrestrial life is neither confirmed nor denied by the Bible, and postulates that the great distance between the planets meant that God did not intend for beings on one planet to know about beings on other planets.

Huygens concluded that the availability of water in liquid state is essential for life and that extraterrestrials should have human-like hands and feet because of their convenience.

“What could we invent or imagine that could be so exactly accommodated to all designed uses as the hands are? Celestial beings must also have feet, unless they have discovered the art of flying in some of these worlds,” says Huygens’ book.

The author believed that extraterrestrials would likely be interested in astronomy and observation, sail on boats and listen to music, but would also suffer misfortunes, wars, afflictions and poverty “because that is what leads us to invention and progress”.

The book is considered such a rare find that it is expected to have a starting price of £2,000 to £3,000 when it goes up for auction.

Book valuer Jim Spencer said that flipping through the pages gave a curious sensation due to whether their subject belonged to the future or science fiction.

“It is fascinating to think who turned these pages in 1698 and what they must have felt as they read these descriptions of life on Jupiter or Saturn before gazing up at the night sky and who knows what our own thoughts on these matters will appear to people looking back another 324 years from now,” Spencer added.

The Bell-Shaped UFO Sighted in 1941