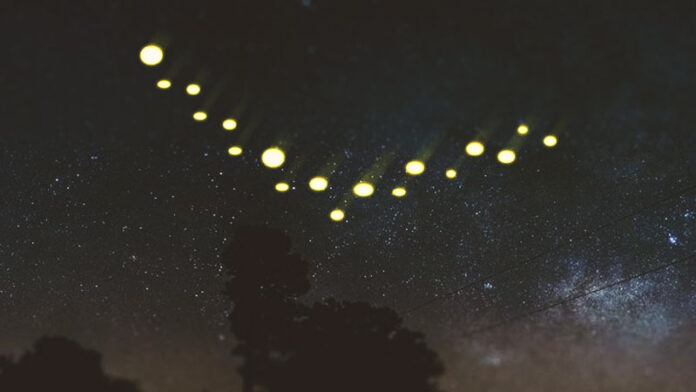 The incident, which became known as “The Lubbock Lights” is considered one of the first major UFO cases in the United States and was investigated by the U.S. Air Force’s Blue Book Project in 1951.

The first sighting of the mysterious lights occurred in the city of Lubbock, Texas, around 9:00 p.m. on August 25, 1951, when Dr. Robinson, Professor of Geology at the Texas University of Technology, was in the backyard of his home talking to two colleagues, Dr. Oberg, Professor of Chemical Engineering, and Professor Ducker, head of the Department of Petroleum Engineering.

The three men spotted several lights clustered in a “V-formation”, as bright as stars, but much larger in size, silently crossing the sky in a few seconds.

Teachers immediately dismissed the hypothesis of meteors as a possible cause for sightings, and while they debated what they had seen, a second group of lights with the same formation crossed the sky.

The sighting was reported to the local newspaper, the Lubbock Avalanche-Journal, and a check with the Air Force showed that no planes had flown over the area during that night.

After the newspaper’s article was published, many other witnesses reported seeing the same objects, including an atomic energy commission official, who reported seeing a similar formation of blue-green lights at dusk that day in the city of Albuquerque, New Mexico, about 600 km away from Lubbock.

On the night of August 30, the show was repeated and this time it was observed by Carl Hart Jr., who made photographic records of the light formation and, again on September 5, it was the turn of two other University of Texas professors to report another sighting.

The Air Force examined the photos in detail and could neither prove nor dispute their authenticity, and the case was followed by Lieutenant Edward J. Ruppelt, the Air Force officer who became the first director of the Blue Book Project.

When Lieutenant Ruppelt began his investigation in Lubbock in late September 1951, hundreds of residents had seen the lights over a two-week period.

Ruppelt interviewed University of Texas professors Carl Hart and others who claimed to have witnessed the lights.

“If a group had been handpicked to observe a UFO, we could not have chosen a more technically qualified group of people than that”, Ruppelt wrote of the teachers’ testimony.

Ruppelt’s conclusion at the time was that teachers had seen a type of bird called Tarambola. The city of Lubbock had installed new steam lights on its streets in 1951, and Ruppelt believed that the plows, flying over Lubbock on their annual migration, reflected the new street lights at night.

However, not everyone agreed with this explanation. William Hams, the chief photographer of the Lubbock Avalanche-Journal, took several night shots of these birds flying over lubbock’s street lights and these did not match what was shown in Hart’s photos.

Dr. Cross, head of the Department of Biology at the University of Texas, said: “It definitely wasn’t caused by birds”. Dismissing the possibility that birds could have caused the sightings due to their slow flight speed and the tendency to fly in much smaller groups than the objects reported by witnesses.

Lubbock rangers agreed that the phenomenon could not have been caused by the Birds Of Arambola, which is the size of a bereaved, since these birds never fly in flocks larger than three, and the sighted formations ranged from 20 to 30 objects.

Dr. Grayson Mead, who also observed the lights, vehemently disputed The Arambola’s explanation: “These objects were blue-green, slightly fluorescent, and too large for any bird. I have enough experience and I don’t know any birds that could go that fast”.

The doubt remained even after the publication of the Official Report on Unidentified Flying Objects, produced by Lieutenant Ruppelt. The document provides the following evasive explanation:

“I thought the teachers’ lights might have been some kind of bird reflecting the street lights, but I was wrong. They weren’t birds, they weren’t refracted light, but they weren’t spaceships either. The lights that teachers saw were positively identified as a very common and easily explainable natural phenomenon. I can’t tell you exactly how the answer was found, because it’s an interesting story of how a scientist assembled complete instrumentation to track the lights. Telling the story would take your identity and, in exchange for your story, I promised the man complete anonymity. With confirmation, the most important phase of the Lubbock Lights was given as ‘resolved'”.

And so, the mystery of the Lubbock Lights remains unsolved, and to this day, some claim that Lubbock was visited by UFOs, while others say it was only a natural phenomenon.

The Stone with Hieroglyphics that came from Space