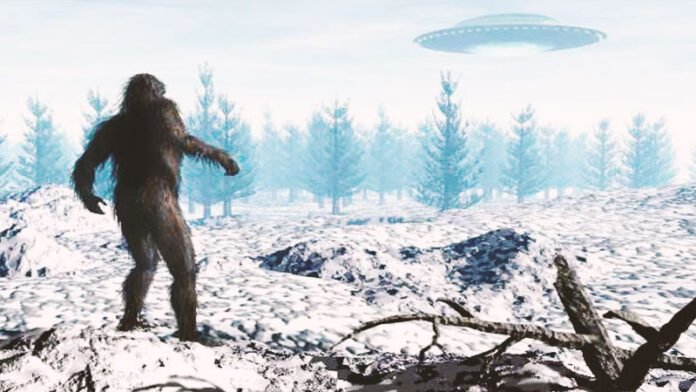 For hundreds of years, people around the world have reported encounters with monsters, fairies, angels and demons and other supernatural creatures, and to this day these experiences persist.

It would be easy to say that these are simply archetypal figures, beings that our collective conscious evokes in our minds with anthropomorphic characteristics, based on fears or subliminal functions of our psyche. Or we could consider the ostensibly bizarre possibility that these are entities of another dimension operating in higher realms of existence.

John Keel, the prominent ufologist and paranormal researcher who became famous for his 1975 book “The Mothman Prophecies”, which became a movie in 2002, once proposed the idea that there are “window areas” around the world, connecting our reality with parallel dimensions. These areas, Keel imagined, can help elucidate some unexplained accounts of these supernatural entities.

Keel referred to these entities as ultra-terrestrial beings, who would be able to cross dimensions at will, often acting as a kind of “cosmic pranksters”.

When it comes to Bigfoot, Sasquatch, Yeti, or any other assignment they may have, there is often a prank or haunting described in their actions. Tree knocks or scary screams warn of their presence until witnesses get close enough so they can catch a glimpse before the creature disappears into the air.

Its appearance can be considered another form of playfulness, incorporating a primitive monkey-like creature, sometimes small and sometimes gigantic, that exudes a noxious odor. However, they are able to avoid contact with us despite the thousands of sightings reported over hundreds of years on every continent on the planet.

An intriguing account linking UFOs and Bigfoot comes from an 1888 encounter between cattle ranchers and a group of Native Americans in Northern California. The natives described three “crazy bears” that descended from the sky on a “small moon” and left them in the forest before leaving.

Another case, in Cincinnati, Ohio, in 1973, a woman named Reafa Heitfield and her daughter were woken up in the middle of the night with a beam of light that was outof an umbrella-shaped object in the sky. Tracking the light to where it landed in the nearby forest, the two noticed a simiesca grayish creature wandering toward the beam. Before they knew it, both the monkey and the ship were gone.

Although these stories may be apocryphal in nature, it is reported that at least 20 percent of Bigfoot sightings coincide with UFO events.

Jack Cary, a cryptozoologist who has studied Bigfoot for decades, says he believes it is alternatively plausible that Bigfoot is being abducted by UFOs in the same way as humans to study its DNA and physical attributes.

Cary also attributes the idea that something called the Mach Effect could explain the possibility of interdimensional travel. The Mach Effect, which is actually a solid principle in physics tested by NASA, employs the use of fluctuations created by a mass body as it accelerates, which in turn are used to generate momentum.

The scientist believes that these fluctuations of the Earth could create momentary tears in the electromagnetic membrane, separateing our universe from another parallel, allowing extradimensional entities to have access to this dimension.

The illustrious astronomer and ufologist Jacques Vallee, who was a student and collaborator of J. Allen Hynek of the Blue Book Project also thinks there may be something extradimensional going on, sharing an impression similar to John Keel’s when talking about the UFO phenomenon. Vallee believes there is something more than the traditional explanation of an extraterrestrial race visiting Earth, rather than believing in a possible window to another dimension.

“We are dealing with a level of consciousness not yet recognized, independent of man, but closely linked to earth. I no longer believe that UFOs are simply spaceships of some race of extraterrestrial visitors. This notion is too simplistic to explain its appearance, the frequency of its manifestations through recorded history and the structure of information exchanged during contact,” says the astronomer.

The Bigfoot’s UFO Investigated by the CIA

In the 1960s, the CIA investigated an alleged simultaneous encounter between Bigfoot and a UFO at Presque Isle State Park in the city of Erie, Pennsylvania. The following reports were documented as part of the Blue Book Project, during which the U.S. government investigated thousands of cases involving UFOs.

Presque Isle is a peninsula that stretches over Lake Erie to form the Bay of Presque, one of the most visited summer tourist destinations in the state of Pennsylvania. On the night of July 31, 1966, four New York tourists stranded their car on the sand after spending the day relaxing on the peninsula’s Six Beach.

One member of the group, Gerald LaBelle, was sent to call a winch, while the others remained in the car. Around 10 PM, a police patrol stopped to ask if they were okay. After being informed that help was on the way, the officers said they would check again within an hour.

When police returned about 35 minutes later, the group said they had witnessed “something strange happening up there” pointing to a spot in the sky above a wooded area. One of the group’s members, Douglas Tibbets, went to investigate along with the two officers.

The group’s two women, Betty Klem and Anita Haifley, remained in the car as they waited for everyone to return. Tibbets and the officers walked about 300 meters along the beach before hearing the car horn, and ran back to see what had happened.

Klem and Haifley clearly shaken, said they witnessed a “black and opaque shape, larger than a man, head and shoulders large, arm-like appendages, no hands, no visible face, as if on its back, in front of their car before disappearing into the bushes” when Klem touched the horn. A scratching sound in the bodywork of the car was also reported.

In the end, this creature was dismissed by researchers as a raccoon, despite the very distinct description of women of a humanoide biped figure. But what about the UFO?

The UFO was described as an angular ship emitting red and orange lights before descending on the beach, where it radiated a beam of white light that tracked something in the forest. But eventually, it took off at an incredible speed to the North, soon after the women found the humanoide figure.

The next morning, officers patrolled the area where the aircraft would have landed. The report says they noticed the presence of two unusual triangular marks in the area coinciding with the ship’s landing zone. The officer who drafted the report said, “I don’t have a reasonable explanation about the UFO” and described the witnesses as credible.

The investigation of the case was eventually abandoned, remaining unsolved to this day. Despite the testimony of the group members, the Blue Book Project report made no definitive conclusion.

A local television station broadcast a segment a few years later, where he interviewed a man who claimed the UFO was a hot air balloon he had ordered and built. But this man’s claim implies that the home-made hot air balloon would have traveled straight, just north for several kilometers, carried by the wind without deviating from the course.

Although witness accounts describe something much more complex than a paper balloon, the man’s testimony does not explain the strange marks on the beach where the ship allegedly landed, confusing CIA investigators.

Could the Presque Isle incident be the result of one of these “window areas”, where archetypical beings of another dimension entered our universe? To this day witnesses have maintained their accounts of what happened and many others later came forward saying they also saw a UFO above the peninsula that night.

As theoretical physics continues to change our perception of reality, with the perspective of a multiverse and quantum intertwining, it seems that what Einstein called “ghostly action at a distance” may be a little more ghostly than we thought.