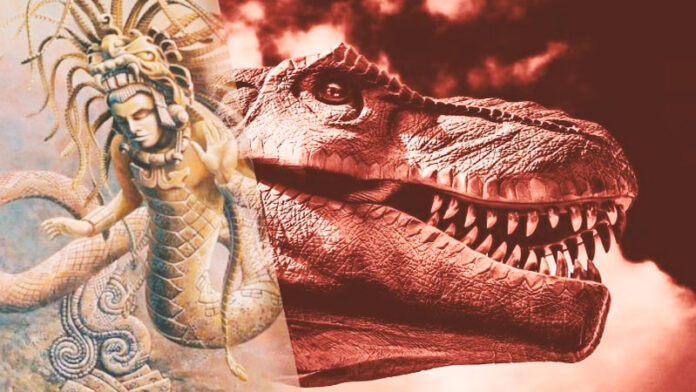 There’s a lot to figure out about what may have happened on Earth millions and millions of years ago. Not least, what could have been the far-reaching consequences of those times?

We had no idea that dinosaurs existed until the early 1800s, when the first fossils were found. Could the first humans and dinosaurs have coexisted at some stage in prehistory? If not, how do we explain the numerous stories, ancient works of art and depictions of dinosaur-like creatures often interacting with primitive man?

Accepted history suggests that dinosaurs disappeared about 65 million years ago after the impact of a gigantic asteroid that hit Mexico’s Yucatan Peninsula. It is uncertain whether extinction occurred immediately, relatively speaking, or whether dinosaurs, in limited and very small numbers, managed to survive.

Some theorists suggest that some of these creatures may well have survived, perhaps even in an underground region of the Earth and prospered and, according to some researchers, they would have developed into a highly intelligent and advanced breed of creatures.

And it was these creatures that became the “ancient gods” of mankind, and their lineage could still exist today, silently in the shadows. They are the “reptilian beings” that researchers like David Icke have promoted and talked about for several decades.

Although it may seem very strange, it is an extremely interesting theory. When we begin to examine David Icke’s claims that reptilians are actually from a “water-based planet” in the Alpha Draconis star system and it would have been possible that these “reptilians” came from another planet many millions of years ago and could have genetically altered a more suitable type of “dinosaur” so that they could assume a physical identity here on Earth.

As speculative as it is, this theory received a boost in March 2018, when the Journal of the American Chemical Society published an article and the results of a study by Dr. Ronald Breslow, a Columbia University professor, who claimed that if there were life on planets in other parts of the universe, they might as well be advanced versions of dinosaurs.

In its most basic form, Breslow’s theory is based on the belief that essential amino acids, vital to life to form, came to Earth brought by meteorites billions of years ago. These key pieces then reacted and created what is known as the “primordial soup”. From this, all native life on Earth arose, including dinosaurs. Given this reaction here, Breslow states that it is likely that such reactions existed on other planets. And if we assume that on these other planets dinosaurs were not destroyed by an asteroid, they kept advancing, not allowing any kind of “mammal-based life” to take the dominant position.

Perhaps these circumstances that allowed the flowering of life in the form of mammals and, eventually, humans, are simply unique to our planet. Perhaps that’s why our world has received and continues to receive numerous visits from smart entities from other parts of space and time. And, of course, if we bring the notion that humans are the intentional creation of an external extraterrestrial force, the possibilities increase even more.

There are numerous representations of relics from the ancient world that clearly show humans next to dinosaurs, or what presents respective notable similarities.

Perhaps one of the most spectacular examples of this are the “Ica Stones of Dinosaurs” discovered in Peru in the early 1960s. Although some doubt its authenticity, they clearly show a whole range of dinosaurs recognizable by us today.

Another great example lies in the Angkor Wat Temple, in Cambodia, which is the largest religious monument on the planet. The building was built by King Suryavarman II in the early 12th Century as its central temple and capital of his kingdom, and shows a stootaur carved into one of its walls.

Perhaps as a lateral thought, the legends of dragons, mainly, but not exclusively, of the Far East, share some connection with dinosaurs or reptilians, or perhaps even both.