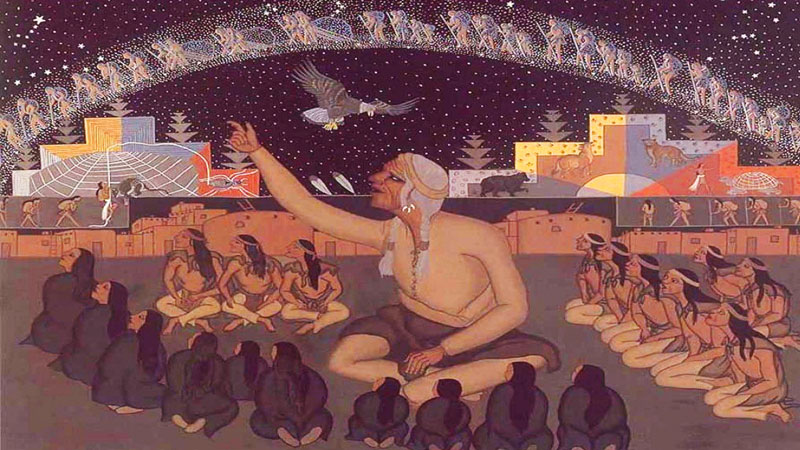 Dr. Ardy Sixkiller Clarke, an emeritus professor at Montana State University and former director of the Center for Multicultural Bilingual Education, is descended from Native Americans Cherokee and Choctaw and has worked with indigenous people for most of her career and has some amazing stories to tell.

In her book “Encounters With Star People, Untold Stories of American Indians”, Dr. Clarke shares many stories, and one of them comes from a man named Harrison, a descendant of a Native American elder.

This is an excerpt from hers book:

“I first learned about the “Star People” when my grandmother told me the ancient legends of my people. My childhood reality included narratives that traced the origins of the indigenous people of the Americas to Pleiades; stories of little people who intervened in people’s lives; and legends about the magical gift of the DNA of the “Star People” that flowed in the veins of the indigenous tribes of the Earth. I embraced the stories of the celestial visitors who lived among the Indian people as part of my heritage.

Located in the states of North and South Dakota, Wyoming, Idaho, and Montana, the Northern Plains Indian Tribes have many accounts about UFOs. The story in this chapter is told by a well-respected elder of a Northern Plains tribe. His encounter predates the crash at Roswell. Since I recorded this story, Harrison has passed, but the time I spent with them over the years, changed my life.

Harrison told a story of how his grandfather took him to a spaceship in the summer of 1945. He said he was 12 at the time and explained how the Army Corps of Engineers came to the reserve around the summer of 1947 to examine the river and surrounding area for the construction of a dam. The Army Corps of Engineers confiscated the land and in return gave Harrison’s grandfather a worthless piece of land on the other side of the butte.

“I spent every summer on his place from the time I was six years old. Mom and pop both worked for the tribe and they didn’t want me home alone during the summers. So every May I packed two paper bags: one with a change of clothes and the other with books, marbles, and my toy gun. My folks dropped me off to live with Gramps from June to late August. I loved my summers here, even the isolation. I was the only child for miles. I rode horses and herded cattle. Helped with the chores. Whatever I could do. As I got older, there were bigger chores and more responsibility. There was no TV or videos like kids have today. At night Gramps amused me with the ancient myths and legends of our people.

Clarke’s relationship with Harrison grew over the years, the two of them met when his school district requested her assistence in applying for a federal grant. Harrison was her contact and was responsible for escorting her through the reservation.

Dr. Clarke explains, “It took almost 25 years of visits for Harrison to ask me if I believed in the Star People. Someone told me that you collect stories about the Star People and I find that unusual.”

She replied, “I’ve been collecting stories for a few years. I grew up listening to the old stories of my grandmother’s Star People. Wherever I go, if I’m among the indigenous people, I ask them about their stories of UFOs and Star People. Maybe one day I’ll write a book, I’ve heard some amazing accounts from American Indians.”

Harrison then offered to take her to the site, where he shared an incredible story that occurred on his grandfather’s ranch before the Army Corps of Engineers became involvement. He told a story his grandfather told him about a spaceship that crashed on the property.

“I saw the ship, I went aboard it. It was a long cylinder about 30 feet wide and 60 feet long. I measured it by pacing it off. Most of it stuck inside a butte, close to the water level. It was well camouflaged. You can’t see the butte now, it was covered by water when the Corps of Engineers flooded the valley creating the reservoir.

The crash shook the ground so hard that Gramps thought the house was going to collapse. You can still see a crack in the foundation of the log cabin that Gramps said occurred when the spaceship crashed. The horses were so frightened that it took a month to round them up, and even then they were constantly trying to escape. At first, Gramps thought it was an earthquake, but when he cleared, he saw the craft. It hit with such force that only a small section stuck out of the butte, but Gramps not only had a keen eye, he knew this land like the back of his hand. The smallest disturbance caught his attention. For the longest time he sat on the butte watching for any sign of life. He kept a vigil for days. Finally after a week or so, he ventured to the place of impact.”

His grandfather told him that the “star men” who crashed and survived there lived on their ship for about 5 months before another ship came to rescue them.

“At the time of the crash, the closest ranch to our place was 10 miles away, and as fate would have it those neighbours had moved out of state days before the crash occurred. Gramps delighted in keeping the star men’s presence a secret.”

Harrison explained that the first time his grandfather approached them, he did so by taking them an offer of food. They told him they didn’t eat meat. He described them as taller than humans, at least 7 to 8 feet tall and very white.

“He described them as being so white that you could almost see inside them. I’m not sure what he meant by that except he said their skin was thin. They had long slender fingers, much longer than humans. Their hair was white. When the sun shined on it, Gramps said it looked like a halo surrounded their heads. He said that sometimes they looked like the angels depicted in the paintings of his bible, except they did not wear gowns. Their eyes, too. He said they changed color depending on the light.

He was particularly interested in their clothes. They wore a one-piece light green outfit. He told me there were times he saw them wading in the river, and when he approached them their suits were dry. He told me he wished he had a suit like that. When I think of the old man and how he viewed the star visitors, he did his best to describe what he saw. I’m sure if the same thing occurred today, the observers might offer a more sophisticated perspective.”

Harrison went on to explain that there were fourteen of them and how his grandfather wasn’t sure if everyone survived the accident. Harrison says that when he arrived in the summer, after the visitors left, he entered the ship and there were seventeen seats.

“Gramps said that he often saw the Star People picking up rocks and plants. At first, when they saw him, they vanished before his eyes. He never discovered an explanation for that, but he wished that he had that power,” Harrison laughed. “Gramps thought that was the ultimate trait-simply to vanish in thin air when you wanted. I can’t imagine how he planned to use it. As time passed, Gramps said the star men realized he meant no harm and they didn’t disappear when he approached. Overtime, it became clear to him that they were concerned about their craft. They did not want it discovered.”

His grandfather said the beings lived there from late November until April. According to him, another spaceship appeared on April 17, 1945, he witnessed the rescue and after that never saw them again.

“He knew they were waiting for a rescue craft, so he expected it. He told me their spaceship was one of four exploring the Earth. They had been dropped off by a bigger ship that was circling Earth. The big ship would return for them but not for some time. They just had to wait. They were not afraid they would be discovered, they could make themselves invisible, but they could not do the same with their spaceship.

He watched as they prepared to leave. Each of the stranded star travellers came to him and bowed before they left. He understood they appreciated his discretion.

Gramps said they were voyagers and traveled the universe observing life on other worlds. They had been coming to Earth for thousands of years observing, collecting and noting changes. One day, they took him aboard their craft and showed him pictures from their home. As he described it, I suspect it was some kind of a TV or computer, but in my grandfather’s day there was no such thing, so he was enthralled by what he called “a picture machine.” He talked about flashing pictures that showed a place different from Earth. It reminded him of the Bad-lands, but with no vegetation. Their houses were underground. He asked them if it was Heaven, and they told him they did not have a place such as heaven. He was fascinated by the picture machine and went back several times to view the pictures. Apparently, the star visitors told him they liked the green of Earth, and they thought the Red Willow that grew along the banks of the river was quite beautiful in April. They loved the water. On their world, water was underground: nothing on the surface. My grandfather frequently collected geodes for them. They were amazed when he broke them open to reveal the crystallized cities inside. They were apparently pleased to add them to their collection. Gramps also taught them the medicinal uses of the red willow and how to propagate it from a small sample.”

The ship was camouflaged and abandoned so that no one would be able to recognize it unless they specifically knew what they were looking for. Harrison explained that when he got on the ship and sat in a chair, it “melted” around him, as if it was alive. It involved the body as a warm embrace and then released you when you wanted to get up. The ship also had what looked to be hieroglyphics.

Eventually, the Army Corps of Engineers came and built their dam that flooded the area where the ship was. Harrison suspects they also took the ship.

Stories like these are fascinating, especially for those who are already aware of the UFO phenomenon and the increasing amount of credibility that the field has been receiving.