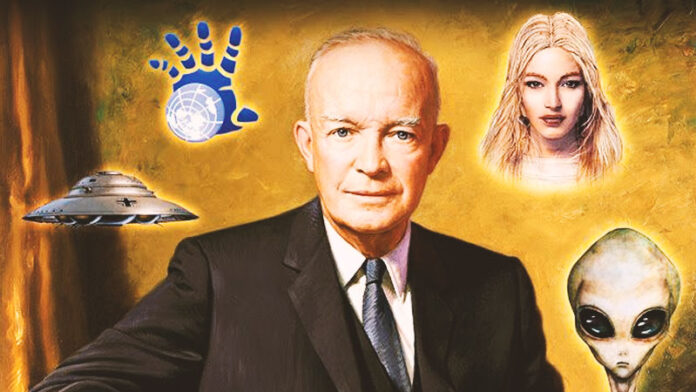 In 1953, President Dwight D. Eisenhower received from his predecessor, President Harry Truman, a fairly robust file on a top-secret project called Majestic 12, which consisted of a group of scientists, military personnel, and other government professionals who worked together to understand and communicate with UFOs and Extraterrestrials.

President Eisenhower, a five-star Army General, has always had a strong belief in life on other planets. In February 1954, he was spending a few days vacationing in Palm Springs when he disappeared for several hours on a Saturday afternoon, and even missed a scheduled public dinner.

He was not seen again until the end of the next morning and the press questioned his whereabouts. The White House press secretary issued a statement saying the president had broken a tooth and gone to the dentist.

Even at that time, there were rumors that he was visiting extraterrestrials in the vicinity of Edwards Air Force Base and the dentist’s story fell apart after a detailed inspection.

Washington Post writer Peter Carlson unmasked the story of the broken tooth and called the situation a “cover-up.”

The Presidential Library has detailed reports of all of Eisenhower’s medical and dental records and there is no reference to a broken or chipped tooth or a visit to the dentist on his stay in Palm Springs.

The Library also has copies of thanks that were sent to everyone Eisenhower had contact with while in Palm Springs.

There were records of people who met him on the plane, of people who sent flowers, of the reverend who gave the sermon at the Sunday service to which the president attended, and others who played minor roles. But there’s no evidence of any note sent to the dentist. Years later, the dentist’s widow said she did not remember hearing her husband comment that he had had dental treatment on the president.

William Cooper, who was part of the Naval Intelligence intelligence team and had access to confidential documents, is a reliable witness. Their review of these documents revealed that there was contact with a group of extraterrestrials who warned that Earth was on the path to self-destruction and wanted to meet to help establish a lasting peace.

The first meeting with the aliens and President Eisenhower reportedly took place at Edwards Air Force Base in February 1954.

Navy Commander Charles L. Suggs reported that his father attended the meeting between the president and the extraterrestrials, and that Eisenhower met two Nordic-looking beings, tall, with almost white hair and clear eyes, and a third being remained near the door.

The discussions would have been polite. Eisenhower wanted to make a deal with the aliens, but he wasn’t willing to agree to their requirement to stop nuclear weapons tests, and the aliens would have left without any treaty coming into effect.

There have been several eyewitness accounts of a second encounter between Eisenhower and extraterrestrials.

In February 1955, approximately 300 people saw the presidential plane, Air Force One, land at Holloman Air Base in New Mexico, about 200 kilometers from where the Roswell Incident occurred.

Shortly after landing, the pilot instructed the tower to turn off all radar while the president’s plane was on the runway, and shortly after, three round objects were seen in the sky. One landed about 60 meters in front of Air Force One, another hovered over the area, as if watching, and the third disappeared from view.

A man, presumably Eisenhower, came down the stairs of Air Force One and was seen shaking a being’s hand at the disc door and then entering the aircraft, where he remained for about 45 minutes.

When he left, he was not wearing his hat and was clearly visible to many observers. All the witnesses recognized him as President Eisenhower.

Respected author, former congressman and former Pentagon consultant Timothy Good, introduced himself in 2012 to talk about Eisenhower’s encounters with extraterrestrials.

He made the revelation to BBC presenter Frank Skinner on the Opinionated programme. During the interview, he made it clear that authorities around the world have been in regular contact with extraterrestrials for decades.

“Aliens have made formal and informal contact with humans around the world and in all walks of life”, Good said.

Good discussed the purpose of these meetings and stated that in the end, Eisenhower ended up signing an agreement with an alien race called “Greys” and the main terms of the Treaty would be:

“We know that 90% of UFO records can be explained conventionally. However, I would say that millions of people around the world have actually seen a real thing,” says Good.

Since Eisenhower’s meetings, other cases of UFOs landing at or near Holloman Air Force Base have been reported.

UFOs at Holloman Air Base

In 1964, three UFOs crossed the airspace of Holloman Base and were detected by radar, one of the ships seemed to wobble until it finally landed. Three humanoides with grayish-blue skin, wearing what appeared to be pressurized flight suits, were greeted by the air force base commander and four other officers. The aliens remained at the base for several days and their aircraft was supposedly repaired.

Over the years, there have been more reports of UFO landings at Holloman Air Base and several documentaries mention this base as the site of alien landings, among them “UFOs: Past, Present and Future”, produced in 1974 and narrated by the legendary Rod Serling, the creator of the series “The Twilight Zone” which has a segment on UFO landings at Holloman Air Base and the 1955 encounter with Eisenhower. The documentary was nominated for a Golden Globe Award as Best Documentary of the Year.

The Stone with Hieroglyphics that came from Space