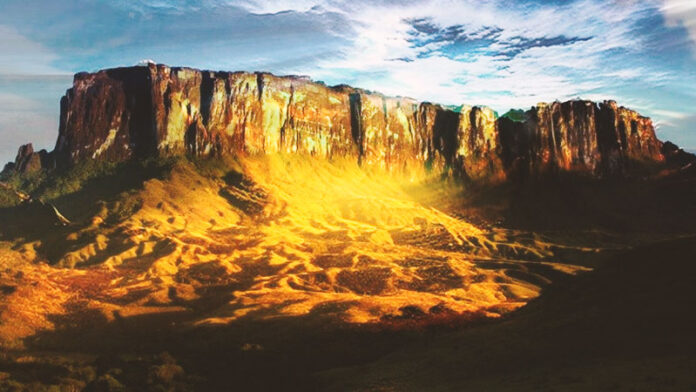 Mount Roraima is a plateau mountain about 400 meters high, located on the border between Brazil, Venezuela and Guyana, and can be an experience far beyond the common for those who visit it.

Before the arrival of the European conquerors in South America, indigenous populations revered Mount Roraima as a regional symbol, referring to it as the “Axis of the World”, a tree from which all the fruits and vegetables of the world grew. It was a quiet place, protected by the Macuxi people.

However, over time, the arrival of foreigners in search of El Dorado and gold-impregnated landscapes caused the purity of Mount Roraima not to remain intact forever.

Subsequently, the arrival of the miners in search of gold marked a drastic change in the environment of Mount Roraima. High-pressure water hoses opened the earth, looking for the region’s treasures. The Macuxi thought they could live peacefully and work together with the miners, but that was not the case and this continues to this day.

The Brazilian government sought to build dams, roads and form a municipal government in the territory, claiming that the population of the region wanted the same infrastructure as the rest of the country. However, the Macuxi maintained their position against the changes, blocking construction and preventing development whenever possible in order to preserve what remains of their culture.

The ancient Indians who lived in the region saw Mount Roraima with a very special mythical meaning. The Pemón Indians believed that he was an integral part of world history. The Great Tree that originated all the fruits and crops was “felled by one of its ancestors, so the tree fell to the ground, triggering a terrible flood”.

According to the myth, Mount Roraima is the remnant trunk of the flood and the rivers that flow in it are the territory of these peoples. The Pemón also believed that whoever climbed the top of the “tepuis”, or “House of the Gods” in the native language, would not return.

Although the tepuis have been climbed by many tourists in search of adventures, only a few have been explored extensively. Some postulate that this isolation and lack of exploitation may mean that some species of plants and animals considered extinct may, in fact, still be alive on Mount Roraima. The flora and fauna of Mount Roraima are unique.

To this day, indigenous people living near Mount Roraima revere this great mountain and its history.

The ancient Indians of the region are not the only ones who believe in the power and mystery of Mount Roraima.

In addition to the intriguing plant life and legends surrounding Mount Roraima, it is also known for its high frequency of UFO sightings nearby and at the top of its plateaus. Tourists reported seeing strange rotating lights hovering above or between Mount Roraima and the Kukenan, another nearby tepui.

The Gran Sabana region is an ideal location for UFO sightings, and some tourism companies are popping up in the area, promising to show tourists the supernatural side of Mount Roraima.

As curious as it may seem, this is not entirely out of the ordinary. Ancient sites around the world seem to attract UFO sightings, from The Chaco Canyon, in New Mexico, to Ancient Egypt.

Most people who dared to climb Mount Roraima reported having gone through some kind of strange experience, be it feelings or things they felt while exploring the area.

Some tourists report experiencing altered states or intense feelings of reverie or bizarre dreams involving aliens, which some believe is due to their location in a high-energy zone, similar to Stonehenge or the Bermuda Triangle.

Even skeptics seem convinced of a mysterious power of Mount Roraima after exploring it, and for those who want to go beyond the typical adventure of hiking in remote mountains, Mount Roraima offers much to explore.

From its indigenous culture deeply rooted in legends and myths, its incredible flora and fauna not yet tarnished by modern human destruction and current accounts of strange activities at the top of the great plateau, Mount Roraima leaves its explorers with more questions than answers.