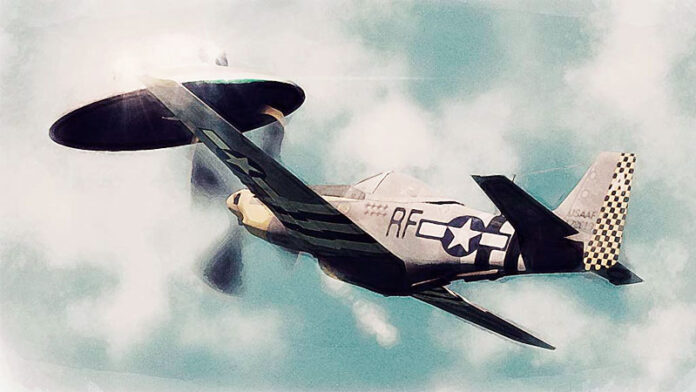 The incident, which to this day has no plausible explanation, involved a 27-minute aerial encounter between veteran World War II fighter pilot George F. Gorman and a mysterious high-altitude white object in the skies over Fargo, North Dakota, USA.

The event took place on October 1, 1948 and in the words of pilot Gorman himself during an interview with the local newspaper: “If anyone else had reported such a thing I would have thought they were crazy.”

The incident that became known as the “Gorman Dogfight” was investigated by Project Blue Book, a secret government operation that conducted a series of studies for the US Air Force between 1947 and 1969, with the mission to scientifically analyze UFO-related data and determine whether these objects were a threat to national security.

Although he was only 25 years old when the incident occurred, George Gorman was a veteran World War II fighter pilot, and serving as a Second Lieutenant in the North Dakota Air National Guard.

On October 1, 1948, he was taking part in a cross-country flight along with other National Guard airmen in his P-51 Mustang plane, and while the other pilots landed at Fargo’s Hector Airport, at around 8:30 pm, Gorman remained flying. to get a few hours of night flying in cloudless conditions.

At around 9 PM, he flew over a lighted stadium where a football game was being held and noticed a small Piper Cub plane flying about 500 feet (150 meters) below him.

Shortly afterward Gorman saw another object that he believed to be the taillight of another craft passing to his right, although the Control Tower had no other object on its radar.

The object appeared to be a flashing light and when Gorman looked for the outline of a wing or fuselage, he couldn’t see anything and this was in contrast to the Piper Cub, whose outline was clearly visible.

Gorman informed the Airport Control Tower that he would pursue the object to determine its identity. He moved his P-51 Mustang to full power, about 400 mph (650 km/h), but soon realized the object was going too fast for him to catch up in a straight run. Gorman made a right turn and approached the object head-on.

Near the point of collision, Gorman swerved and dipped his plane, saying the light passed over his plane at a distance of 500 feet (150 meters) before making a 180-degree turn and heading back toward him again.

The collision seemed imminent once more, but the object then made a sudden steep vertical climb. Gorman pursued the object and at 14,000 feet (4,250 meters) altitude, his P-51 stopped. The object was still 2,000 feet (600 meters) above him.

The pilot made two more attempts to approach the object, without success. At this point Gorman broke off the chase. It was 9:27 PM and he flew back to Fargo’s Hector Airport.

They found their Mustang to be measurably more radioactive than other fighter jets that had not flown in several days. This was taken as evidence that Gorman had flown close to an object “with atomic energy”.

In his report Gorman described the object as a simple “ball of light” about 6 to 8 inches (15 to 20 centimeters) in diameter that when it increased in speed, it stopped blinking and got brighter. He stated that he did not notice any sounds, exhaust trails or odors from the object, and although he reached speeds of up to 400 mph (650 km/h), he was unable to keep up whatever it was.

Gorman reported that he temporarily faded out due to the excessive speed he reached when trying to turn with the object.

“I am in fairly good physical condition and I don’t believe that there are many, if any, pilots who could withstand the turn and speed effected by the object and remain conscious. I am convinced that there was a definite thought behind its maneuvers. I am further convinced that the object was governed by the laws of inertia because its acceleration was rapid but not immediate, and although it was able to turn fairly tight at considerable speed, it still followed a natural curve,” Gorman said in a sworn statement to the USAF investigators on October 23, 1948.

At the Control Tower, air traffic controllers L.D. Jensen and H.E. Johnson viewed the object through binoculars but were unable to see any shape around the light.

According to Johnson, who reported seeing the Piper Cub and the UFO at the same time, the object was traveling at high speed and was fast enough to increase the spacing between itself and Gorman’s fighter. Johnson described in his report that the object was “only a round light, perfectly formed, with no fuzzy edges or rays leaving its body”.

The Doctor. A. E. Cannon, the pilot of the Piper Cub, and his passenger also saw the object both in the sky and on the way back to the airport, where they immediately joined traffic controllers at the tower. Cannon described the light as moving “very quickly, much faster than the P-51”.

Air Force investigators also ruled out the possibility that the illuminated object was another aircraft, Canadian Vampire fighter jets or a weather balloon.

The Project Blue Book investigation officially claimed that there were flaws in the recorded evidence.

A plane flying high in Earth’s atmosphere is less shielded from radiation than one at ground level, so the Geiger counter readings were considered invalid evidence to claim that the luminous object was powered by atomic energy.

Furthermore, the Air Weather Service revealed that on October 1st it had launched an illuminated weather balloon from Fargo at 8:50 PM and at 9:00 PM the balloon would be in the area where Gorman and the Piper Cub passengers have spotted the UFO.

In early 1949, the illuminated weather balloon would become the official cause of the “Gorman Dogfight Incident” in the Project Blue Book archives.

The incident received widespread national publicity and helped fuel the wave of UFO reports in the late 1940’s.

Some UFO researchers, such as Dr. James E. McDonald, physicist at the University of Arizona, and US Marine Corps Major Donald Keyhoe never agreed with the conclusions of the Air Force investigation and continued to regard the case as unsolved.

Despite the official explanation, in 1956, Captain Edward J. Ruppelt, who led the investigation of Project Blue Book, published the book “The Report on Unidentified Flying Objects” where he stated that the Gorman incident was one of three classic incidents involving UFOs in 1948 that proved to Air Force intelligence experts that UFOs were real.