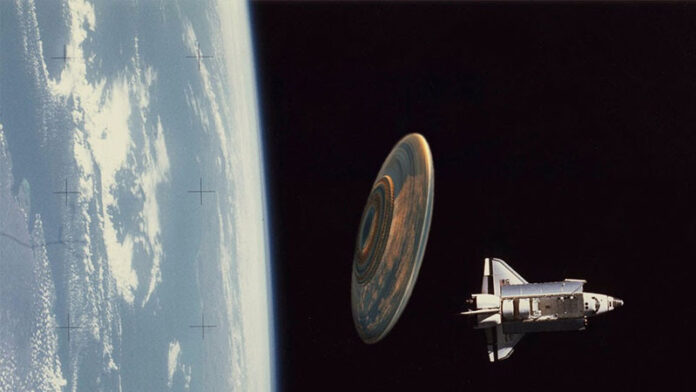 In any case, the history of these missions holds a rich range of anomalous events, which are always explained by NASA as being erroneous interpretation or natural occurrence. However, there are cases witnessed by the Space Agency’s own officials, which NASA refuses to comment on.

One of these cases was recorded in the statement made by former Spacecraft Operator Clark C. McClelland, on his own website, claiming the sighting of an Extraterrestrial being in the Space Shuttle’s Payload Bay:

“I, Clark C. McClelland, former Space Craft Operator (ScO), personally observed an 8 to 9 foot (2.43 to 2.74-meter) tall ET on my 27-inch video monitors while I was on duty at the Kennedy Space Center, Launch Control Center (LCC). The ET was standing upright in the Space Shuttle Payload Bay having a discution with two tethered US NASA Astronauts. I also observed on my monitors, the spacecraft of the ET as it was in a stabilized, safe orbit to the rear of the Space Shuttle main engine pods. I observed this incident for about one minute and seven seconds. Planty of time to memorize all that I was observing. IT WAS AN ET and Alien Star Ship!

To all who have faith in me, I present them with an artistic conception (image below) of what I saw many years ago at KSC. It was a tall creature, approximately 8 to 9 feet tall. It had a humanoid body shape with two arms, two hands, two legs, two feet, a slim torso and a normal head for its size. The color of its skin could not determine. It appeared to have two eyes, but the image was not detailed enough for any other comments.

How did it communicate? I have no idea. It did move its arms a lot. Almost like giving instructions! I heard no voice communications. The helmet was not as large as our two NASA Astronauts, and had a viewport to look forward. It had a small, perhaps a communication device, attached only to the right side of the helmet.

I saw no oxygen tanks. It had a wide belt wrapping around it. It did not appear to be tethered as the two astronauts were to the sides of the Shuttle structure. I observed nothing that appeared to be a weapon. The time of this amazing scene was one minute and seven seconds. I timed it on my Astronaut chronograph watch.

A friend of mine later contacted me and said that this person had also observed an 8 to 9 foott tall ET INSIDE THE SPACE SHUTTLE CREW COMPARTMENT! Yes, inside OUR SPACE SHUTTLE! BOTH missions were DoD (Pentagon) TOP SECRET (TS) encounters!

With my verifiable background, there is no Federal Government Agency that can say I’m crazy.

The above statement was posted on Clark’s own website.