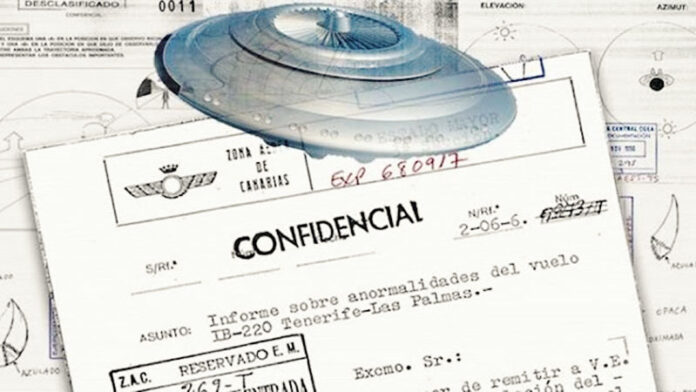 The process of declassifying documents began in 1991, when the Ministry of Defense decided to analyze the reports and reduce their level of classification in order to make them available to the general public who did not have access to these documents on “Sightings of Strange Phenomena”, also known as “UFO Archives”.

A total of 80 files, with more than 1,900 pages on sightings cover phenomena that occurred throughout Spanish airspace, from the first observed in 1962 in San Javier until the last date of 1995 in Seville. Some are sightings in a single place, while others cover various points of Spanish geography as they are seen from an airplane or coincide on the date and description in different locations.

Reports include the location of the sighting, the date, the summary of the facts, considerations, conclusions, and the proposal to classify or declassify each document.

The material is available to the public in the Online Library of the Spain’s Ministry of Defense and can be accessed in this link: https://bibliotecavirtual.defensa.gob.es/BVMDefensa/exp_ovni/i18n/micrositios/inicio.cmd

One of the most interesting UFO sightings was reported by pilots and crew members when President Adolfo Suarez was traveling from Germany to Spain.

The strange UFO was located in an undisclosed location. The meeting occurred when the former Spanish President was aboard an Air Force aircraft. The pilots and passengers witnessed strange lights that could not be explained. The report says: “Overnight, on February 25, 1980, aboard the 401st Squadron, on a flight from Germany to Spain with President Suarez, strange lights were observed by pilots and passengers”.

In addition, the documents reveal a number of different sightings that occurred over Spain when UFOs were detected by radar, but were invisible to pilots who were sent to intercept them.

A document dated November 28, 1979 indicates that numerous individuals observed two UFOs in Madrid. A military plane was sent to search for UFOs. The pilot of the interceptor aircraft saw nothing, although “the weather conditions are excellent” and “radar contact has been established four times,” the report says.

This same report details other sightings, one of which occurred on November 27, 1979, when “lights in the sky were observed by many people” and “unknown radar echoes” were recorded.

In addition, the report details how, in 1971, a “luminous object was seen by the crew of a Lockheed T-33 aircraft on the Talavera-Getafe route” and in 1977, mysterious lights were seen above Madrid.

The first UFO sighting over Madrid was recorded on December 11, 1968. Two different witnesses reported the incidents, the first at 8:05 p.m. and the second at 8:30 p.m., about the presence of “a very clear object with changes in brightness”, in the southwestern parts of the Spanish capital.

The Mysterious StoneHead of Guatemala