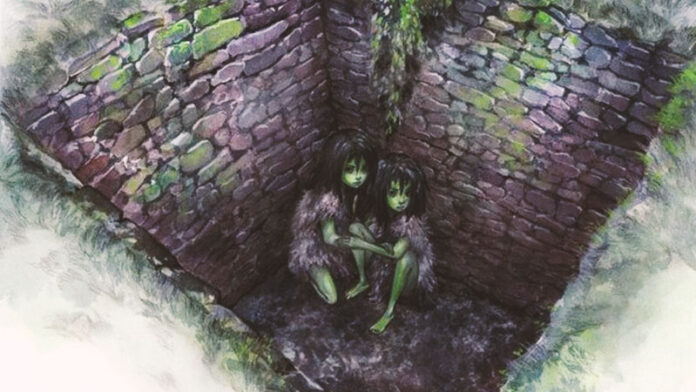 The incident took place between the years 1135 and 1154 in England, specifically in the town of Woolpit, located in Suffok.

According to medieval stories, children were trapped in a “wolf pit”, holes that were dug as traps so wolves wouldn’t eat livestock.

The discovery would not have gone down in history were it not for a strange peculiarity that caught the attention of the residents: the boy and the girl had olive-green skin.

Their clothes were equally strange and they were in a state of severe malnutrition, and although their features were very human, they looked disoriented and unfamiliar with everything around them.

The inhabitants took the children to the village and offered them a wide variety of food, but they refused to eat until they were offered soy and beans, which they ate quickly.

The language in which the children spoke was unknown to the inhabitants of Woolpit, and bore no resemblance to English, German, Spanish or French.

When the children were able to learn the local language, they explained that they came from a place called San Martin, full of caves and subterranean landscapes where the sun never shines and all the inhabitants had the same green skin.

The children told that they were taking care of their father’s flock when they heard a very loud noise, so they followed one of the caves and wandered in the dark for a long time until they came to a very strong light, they tried to go back but they couldn’t.

Unfortunately, the boy became ill and after a while he died, while the girl survived and adapted well to her new environment, even her skin gradually changed until it acquired a pale tone similar to that of the people of Woolpit and was baptized with the name of Agnes.

The story was documented in two works written in Latin that feature the testimonies of the colonists: Historia Rerum Anglicarum (History of English Affairs), by William of Newburgh, published in 1189, and Chronicon Anglicanum (Chronicles of England), by Ralph of Coggeshall, published in the year 1220.

The book by William of Newburgh, an English clergyman and historian who lived in the 12th century, is one of the main sources of medieval history, spanning the reigns of William the Conqueror to Richard the Lionheart (1066−1198). In this five-volume work, what happened to the Woolpit children is well documented and described the events based on the testimonies of those who discovered the two brothers in the “wolf’s pit”.

The historian clarified that, for him, the strange episode of the time had really happened.

The monk Ralph of Coggeshall, meanwhile, reported in the Chronicles of England that the children were taken to the house of Richard of Caine, one of the villagers, where Agnes, the surviving sister, worked for many years as a servant.

Coggeshall put together the stories he collected from witnesses in chronological order. The experts who studied his work agreed that the corrections and erasures made by the author show that he struggled to verify the data.

Both historians agreed that the girl managed to survive and talk about her past and, according to the texts, Agnes and her brother were herding their father’s cattle when they heard a loud noise and followed him to the “wolf’s pit”, where were found.

According to narrators, the noise the children followed could have been the bells of Bury St. Edmunds, located 15 kilometers from Woolpit.

As for the children’s color, some have suggested that they might have suffered from chlorosis, popularly called the “green disease”, a rare condition caused by anemia and characterized by a greenish tinge to the skin. However, some experts claim that, despite the popular name, chlorosis does not leave the skin green, but rather a minor, almost pale pigmentation.

Regarding the unknown language, some historians have suggested that it could be the Flemish language, a regional variety of the Dutch language spoken in northern Belgium and southern Holland, but this explanation is unlikely as in the 12th century there were major sea lanes linking England to the mainland, and many people who spoke that dialect passed through the village of Woolpit and the villagers, even if they could not speak it, would have recognized the language.

Despite all the research that has been done over the centuries around this inexplicable case, so far there is no scientific evidence that proves the truth or disproves this fascinating story that has become known as “The Legend of the Green Children of Woolpit”.