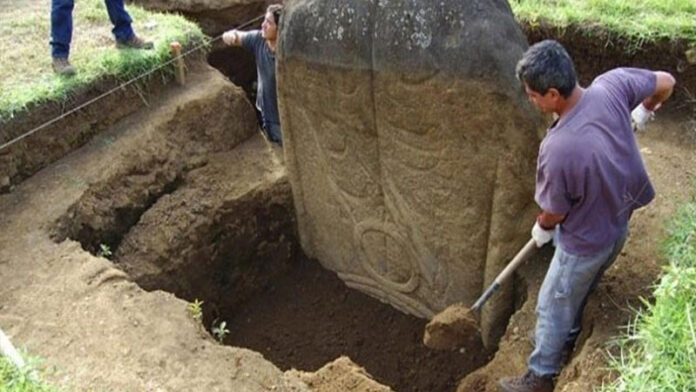 Easter Island, located in the southern Pacific Ocean about 3,750 km west of the coast of Chile, remains to this day one of the most remote and mysterious places on our planet and, to preserve the beautiful archaeological remains of this magical place, Rapa Nui National Park was declared a World Heritage Site by UNESCO in 1995.

Recently it was discovered that some of the monumental sculptures called Moais, the famous humanoid statues of Easter Island, were semi-buried, in some cases up to eight meters deep underground, and have several lithic inscriptions, commonly called petroglyphs, which are still being deciphered.

“The reason everyone thinks the Moais are just heads, is because there are about 150 statues buried up to their shoulders on the slope of a volcano, and these are the most famous, the most beautiful and most photographed among all those of Easter Island,” said Jo Anne Van Tilburg, director of the Easter Island Statue Project.

Because they are buried, the symbols carved in the volcanic stone have been protected over the centuries and researchers believe that engravings may represent aspects of the culture of the local people.

If for the experts in the area it was already very difficult to establish the approximate date of the origin of the Rapa Nui civilization that created them, this last and important discovery makes it even more difficult to clarify this great historical find so interesting and full of mysteries.

Currently, 887 statues are catalogued, although the total number could reach close to 1,000.

The Rapa Nui have been perfecting the Moais over time, building them higher and with better finishes and more stylized shapes, but it is not yet known for sure how or why these statues were built, nor if they were purposely buried or by the action of time.

The researchers have not yet deciphered the meaning of the enigmatic engravings, but this is not the only mystery involving the Rapa Nui and their Moais that weigh up to 80 tons, reaching up to 10 meters high.

Another conundrum is the decline of its civilization and, contrary to the traditional view, which relates the collapse to the environmental wear and tear promoted by human exploitation of the island, new theories suggest that the cause has been contact with Europeans, who brought diseases and even an infestation of rats.

The fact is that, from the 17th century, the population of Easter Island collapsed rapidly from 15,000 to less than 2,000 inhabitants.

Undoubtedly, the Easter Island Moais are considered one of the most famous and beloved monuments in the world, being a true tourist attraction for the thousands of tourists who go to the island every year.

Who are the Pleiadians?