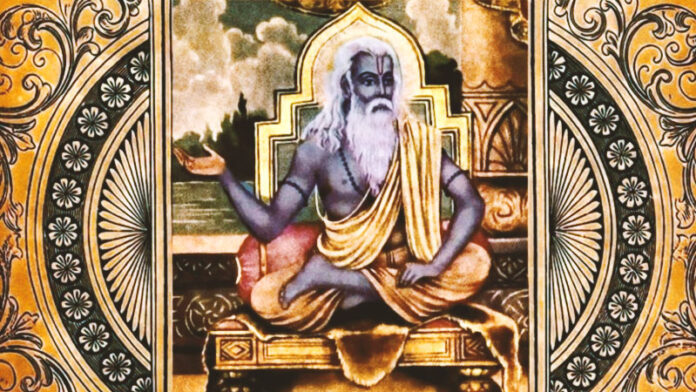 Many modern scientists consider themselves the first to create the technological advances we use today.

However, many of these discoveries are nothing more than reinventions created through the examination of india’s ancestral knowledge and wisdom.

Below we list just a few of the many scholars of Ancient India:

John Dalton is often considered the inventor of atomic theory, but that’s not true.

The concept of the atom and atomic theory emerged 2,600 years ago, being invented by the wise Acharya Kanad.

He was the first man in history to describe atoms and molecules. In his work he explains that: “every object of creation is made of atoms which, in turn, connect to each other to form molecules”.

The Flying Objects of Maharshi Bhardwaj

The achievements of the sage Maharshi Bhardwaj are described in the texts called “Purana”.

He was one of the Great Seven Sages or “Rishi”, and his wisdom is recognized till today.

In the distant past, the sacred texts “Mahabharata” and “Ramayana” were used to describe aeronautical inventions, a domain which was highly advanced at that time.

Maharshi Bhardwaj, examining the ancient texts, discovered and wrote in detail about how planes or spacecrafts appeared and disappeared and the way they traveled from one planet to another.

Garga Muni: The Sage of Stars

Garga Muni was king Prithu’s chief astrologer, and this king was considered the earthly incarnation of the Hindu god Vishnu.

Few things are known about Garga Muni, but it is known that he was passionate about the study of the stars.

In his work entitled “Garga Samhita”, he recorded 60% of all known astrological science to this day.

This sage described the detailed rules of astrology in his work in the ancient past, at a time when the line between astrology and astronomy was not yet defined.

Vishwamitra: The Inventor of Missiles

Vishwamitra was first a king before became a sage, and ended up being one of India’s most revered and appreciated sages.

He is considered a Rishi, one of the Great Sages, in the third book of the ancient sacred text Rigveda.

Thousands of years ago, he discovered the missiles. He was also a strong warrior, and taught Rama, considered one of the avatars of the god Vishnu and the hero of the Ramayana epic, how the missiles worked.

The missiles described by Vishwamitra were of many types, some had of fire, others smoke, and, in addition, there were also missiles that carried the powers of the Moon and the Sun.

Sushruta was a physician, surgeon and professor who worked in Varanasi, northern India, and wrote the treatise entitled “Sushruta Samhita” which contains several detailed references to diseases and medical procedures.

It is said that he lived in a time between the years 1,200 and 600 BC, and mythological texts state that this sage learned about surgical procedures with Dhanvantari himself, the Hindu god of medicine.

In the 17th century, English doctors traveled to India to observe and learn the techniques used by Indian surgeons. The instruments described in the Sushruta Samhita were then modified and perfected in the Western world.

Bhaskaracharya and The Law of Gravitational Force

Bhaskaracharya, also known as Bhaskara Akaria, or Bhaskara the Second, was an Indian astronomer and mathematician who was born in vijjadit village in Mharastra in the year 1114 and died around the year 1185.

His mathematical works that survived time are called “Bijaganita” and “Lilavati” and go far beyond what is known in the scientific world, such as the famous Bhaskara Formula, used to solve second-degree equations.

Bhaskaracharya discovered the Gravitational Force almost 500 years before Isaac Newton and explained it in his text “Surya Siddhant”, describing it as follows: “Objects fall on Earth due to an attraction force generated by the Earth. Therefore, the Earth, the planets, the constellations, the Moon and the Sun are held in orbit due to this attraction”.