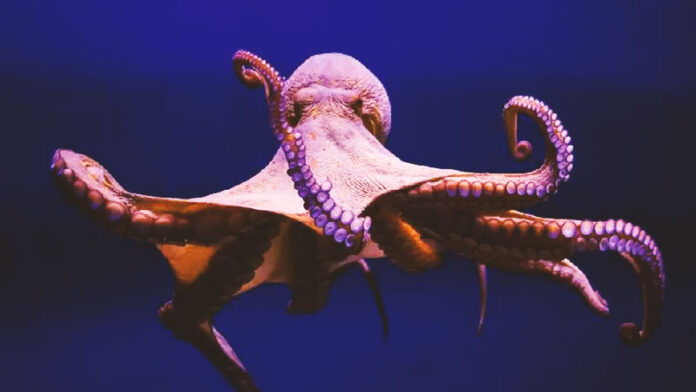 Octopuses are animals with eight tentacles connected directly to their heads and have a more complex genome than humans.

They are present in all of Earth’s oceans and are considered the most intelligent of all invertebrate animals.

These strange animals have a sophisticated nervous system, camera-like eyes, flexible bodies and can change color when faced with danger, in addition to being able to spontaneously amputate body parts, a process known as autotomy.

These features are not found in the ancestors of the octopus, so extraterrestrial origin would be a plausible explanation. According to recent research, they would have evolved on another planet before arriving on Earth.

The research was carried out by 33 researchers from different areas of knowledge on 23 Universities and Research Centers located in 12 countries, including astronomer Chandra Wickramasinghe, one of the supporters of the Panspermia Theory, which suggests that life on Earth developed from microbes and extraterrestrial bacterias.

According to the research “Cause of Cambrian Explosion – Terrestrial or Cosmic?”, published in the scientific journal Progress in Biophysics and Molecular Biology, about 500 million years ago, eggs of octopus or extraterrestrial microbes preserved in ice fell to Earth, brought by comets or meteors.

The team still has no real evidence of the extraterrestrial origin of octopuses and their relatives, but scientists believe there is already enough evidence to at least support their hypothesis.

“Evidence for the role of extraterrestrial viruses in affecting terrestrial evolution is plausible and has recently been implicated in cephalopod gene and transcriptome sequencing. The Octopus genome shows an incredible level of complexity, with 33,000 more protein-coding genes than is present in Homo Sapiens”, says the research.

Cephalopods are the class of marine molluscs that include octopuses, squids, nautiluses and cuttlefish, and Homo Sapiens is typically considered the pinnacle of evolution on Earth.

“The transformative genes that led from the Nautilus ancestor, from the simple cuttlefish to the squid and the octopus, are not easily found in any preexisting life form. It is therefore plausible to suggest that they appear to have been borrowed from a very distant ‘future’ in terms of evolution, terrestrial or, more realistically, the cosmos in general”, describes the research of Chandra Wickramasinghe, Edward Steele and their colleagues.

“Its large brain and sophisticated nervous system are just some of the impressive features that have suddenly appeared on the evolutionary scene. This sudden evolution could have occurred thanks to ‘cryopreserved squid or octopus eggs’ that fell into the ocean, brought by comets several hundred million years ago, or an extraterrestrial virus that infected a population of primitive squids, causing them to evolve. quickly to the octopuses we know today”, justifies the team of researchers.

This isn’t the first time the scientific community has suggested the theory that life began on distant worlds and may have given rise to some or all of life on Earth.

When more than thirty scientists from universities and institutes around the world muster up the courage to defend such claims, we must ask ourselves whether it is really worth betting on such unorthodox hypotheses.