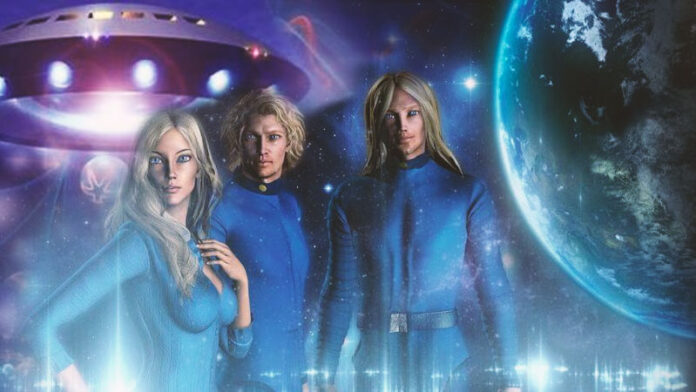 The Pleiadians could be the most physically similar to humans of all the extraterrestrial species ever reported throughout history, with blond to reddish hair, blue or green eyes and measuring 1.7 to 2.2 meters in height, they could easily impersonate Earthlings, and those who have been in contact with this race claim that their appearance allows them to freely explore our planet.

The Pleiadians, also known as “Nordic Aliens”, are considered the angelic beings represented in many ancient religions and civilizations.

They are present in many Native American legends who say that their ancestors are from the Pleiades. The Navajos call the star cluster “Sparkling Suns”, the Hopi refer to these beings as “The True White Brothers,” and other tribes such as the Cherokees, Lakotas and Dakotas teach that native Americans originated long ago in the Pleiades and that the indians are on earth as “star seeds”, with the mission of bringing light and knowledge.

The UFO researcher Michael Salla believes that beings from other worlds in the Pleiades star cluster are distant cousins of humans and reports that the Pleiadianos are motivated to connect with humanity out of concern for the future of the Earth.

The medium Barbara Marciniak is an internationally known spiritual channeler who speaks for a group that refers to itself as “The Pleiadians”, a collective of multidimensional spiritual beings of the Pleiades star system with the mission of assisting humanity in the process of spiritual transformation.

Also called “The Seven Sisters”, the Pleiades are a group of stars in the constellation Taurus.

In fact, there are more than 1,000 stars within the cluster and, under ideal conditions, about 14 of them can be seen with the naked eye and the brightest of the stars in the cluster is Alcyone, considered seven times brighter than our Sun.

Most, however, when looking at the cluster without instrument magnification, observe six stars, but there are seven of them, and this seventh “lost” star is a common theme in several mythologies, including those of Indonesia, Africa, Australia, Europe and America.

Astronomers refer to the group as “Messier 45” or “M45,” a designation that comes from the work of 18th-century French astronomer Charles Messier, who identified and catalogued astronomical objects.

At a distance of 444 light-years, it is the closest star cluster to Earth, and is used as a “Cosmic Distance Scale”, a method by which astronomers determine distances to celestial objects.

The Pleiades in the Cosmologies of Antiquity

For the Greeks, the Pleiades were the seven daughters of the titan Atlas and the nymph Pleione. According to the myth, the Pleiades, called Maia, Electra, Alcyone, Taygete, Celaena, Merope and Asterope, were devoted to Artemis, the Greek goddess of the Moon and hunting.

Orion, the hunter, one day saw the seven sisters and fell in love with them and, determined to capture them, pursued the sisters for seven years, but Zeus whistled of his situation and turned them into stars, placing them in heaven, where Orion could not reach them.

For Nordic cultures, the Pleiades were considered daughters of Freya, the Nordic goddess of love, beauty and fertility, and as a symbol of protection, the Scandinavians and Vikings painted seven spots, representing the seven stars.

The Nebra’s Disc, found in 1999 in Germany, depicts the cluster of stars with the Moon and the Sun. It was dated 1600 BC and researchers believe it may have been a portable astronomical instrument and this artifact is the oldest known portrait of the Pleiades cluster in the West.

Among Asian cultures, the first mention of the cluster appears among the Chinese, around 2350 BC, referring to the Pleiades as “The Stars in Bloom”.

In eastern China is the Mausoleum of Xiaoling, a tomb complex of Emperor Hongwu, founder of the Ming Dynasty. When viewed from above, the complex features the disposition of visible Pleiadian stars, forming a star map and, according to tradition, the tomb, called the “Treasure Hill”, contains “great cosmic secrets beyond the treasure of gold”.

In Japan, Amaterasu, the goddess of the Sun, had fought with her brother Susanowo, the embodiment of the power of nature. Intimidated, she hid in a cave and the world darkened, and to lure her back, her jewels were hung from a nearby sacred tree. Eventually, she left the cave and returned to heaven so that the Earth would once again be nourished by its light. Amaterasu’s jewels are associated with “Subaru”, the Japanese word for the Pleiades.

Hindu mythology tells us that the seven sisters, called Krrtika, were married to the Rishis, the seven wise men who made up the stars of the Bear Major. All lived happily together in the northern sky, until one day Agni, the god of fire, saw the Krrtika and fell in love. Knowing that they belonged to the Rishis, wandered discouraged by a forest trying to forget them. The little goddess Svahi, personified by the star Zeta Reticuli, saw Agni and, in love with him, disguised herself as Krrtika. Svaha became pregnant, and when her son was born, a rumor spread that six of the Rishis’ wives were somehow the mothers of the baby. When the Rishis heard this they divorced their wives, but one of them, Arundhati, refused to leave her husband. The other six wives then became the stars of the Pleiades.

Among the indigenous tribes of North America, the Dakotas believe that the star cluster is the Tiyami, the home of the ancestors, and that when we leave this world, our spirits will be taken to live in the Pleiades.

A famous story among Native Americans is that of the seven young women who were being hunted by a bear. The girls prayed to the gods, who responded by raising the ground beneath their feet. The furious bear scratched the earth, leaving claw marks, but finally gave up and left. The girls were turned into stars and placed in the sky for eternal protection, and the place where they were is the mountain now known as the “Devil’s Tower” in the state of Wyoming, a formation with huge vertical streaks that the natives believe are the marks of the bear’s claws.

Hermeticism is an esoteric system based on writings attributed to Hermes Trismegistus, which includes treatises on the esoteric symbolism of constellations and planets.

Hermes is referred to as “a son of the Nile” and is also considered the father of Western astrology and alchemy, associated with the Greek god Hermes and the Egyptian god Thoth.

According to hermetic traditions, the seven stars open a more refined level of consciousness to the initiates and are seen as a learning school for those who have been purified from the energetic blockages of the subtle body.

The invitation and initiation to the teachings of Pleiadians wisdom come spontaneously during sleep or deep meditation, and the Pleiades are also seen as the source of electrical energy in our solar system, coming from sister star Electra.

Close Encounters with the Pleiadians

This species is less often associated with experiences of direct contacts and, when involved in such episodes, there is usually a message of peace and concern regarding the well-being of the Earth.

One of the most notable cases of contact with the Pleiadianos happened to Travis Walton in 1975, a lumberjack who worked in Arizona and came across an alien ship, being carried aboard by a beam of light emanating from the object. Inside the ship he encountered several types of beings, including a Nordic-type race of tall white humanoides. He was brought back after five days and his story became a sensation on the news. Walton shared his experiences in his book “The Walton Experience”, which became the basis for the 1993’s movie “Fire in the Sky”.

Another contacted was Billy Meier, a Swedish farmer who claims to have filmed, photographed and kept in touch with the Pleiadians throughout his life, conveying his messages of peace and love for humanity.

George Adamski was another of those contacted by a group of Nordic aliens during the 1950s. He wrote several books on the subject, saying that his materials were released by the FBI and the United States government.

There are also rumors that President Eisenhower had a secret meeting with a group of these aliens, who were trying to convince the United States to disarm its nuclear missile program in exchange for advanced technology. The event reportedly took place in February 1954 at Edwards Air Force Base, but it is believed that this encounter did not end with any kind of agreement and that Eisenhower preferred to make a treaty with the “Grey Aliens”, ensuring that the United States could maintain its nuclear arsenal while receiving advanced technologies from extraterrestrials in exchange for permission to experiment with humans.

The message that seems to accompany every encounter with the Pleiadians species is the importance of spiritual awareness and the administration of our planet.

According to these beings, humans are a species very close to them and the process of human ascension involves learning how to overcome our differences in order to live as a collective, in peace and harmony.

The cluster of stars of the Pleiades has taken on enormous significance in almost all ancient traditions and cosmologies and perhaps we instinctively attribute a great meaning to them because we have a place for them in our collective consciousness and, for now, we don’t know why, but perhaps we will find out as consciousness evolves.

Zone of Silence: The Mysteries of the Mexican Desert

The Alien Mask Found in Bulgaria