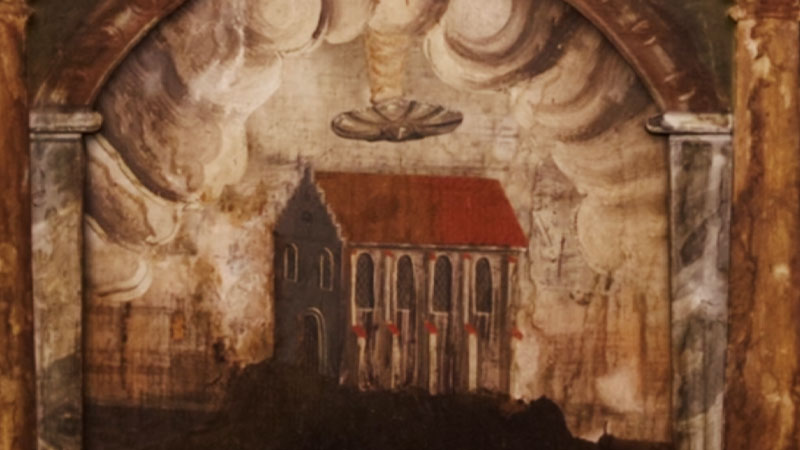 The strange painting appears on one of the walls of the Monastery Church, located within the Medieval Citadel of Sighisoara, Transylvania, Romania.

The church, built in the 13th century, was burned down in the 17th century and rebuilt. That’s when a series of new paintings were made in the church, including the painting of a house surrounded by thunderous sky, which features a mysterious object that looks like a UFO.

The caption at the bottom of the painting reads, “Israel, put your hope in the Lord.”

“The church is evangelical, and the image has a secondary role or is less representative. In fact, there is a painting in the church sacristy with a religious scene representing a cloud, perhaps the assumption of Elijah, the prophet of the Old Testament, going to heaven, but it can lead to a more modern representation that can make us think of a UFO. Many say it’s a UFO, it looks like a UFO, it’s a vision of the artist. They’re like Leonardo da Vinci’s paintings, you can interpret them.”, says Nicolae Tescula, manager of the Sighisoara History Museum.

The author of the mural is unknown, but Tescula believes that the painting was created by someone who lived in Sighisoara at the time.

Nigel Watson, author of “UFO Research Manual”, said: “Flying Saucers, UFOs and other strange objects in the sky have been portrayed many times throughout human history, which appear to be UFOs and aliens appearing in ancient man cave paintings, in renaissance religious paintings and in the works of chroniclers and storytellers.”

The church is located in the middle of a medieval citadel, and in its 700 years, it has been burned twice, which is why its interior contains a mixture of various styles. The Monastery Church also houses many oriental carpets, this collection being the second largest in the country.

Sighisoara is believed to have been the birthplace of the legendary Emperor Vlad the Impaler, who was the basis for Count Dracula’s character.