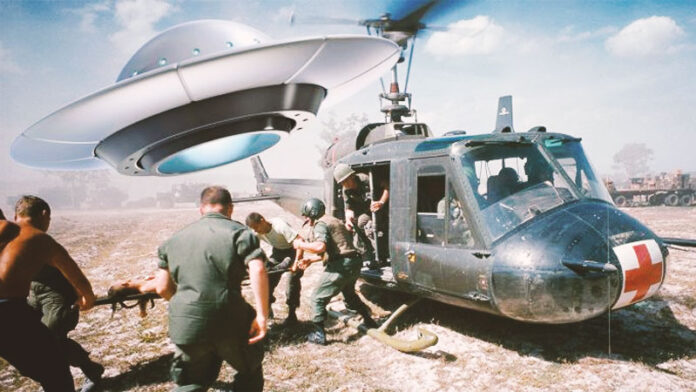 According to the captain, on a training day, an Air Force jet was at a speed of about 575 mph when suddenly an UFO appeared and circled the jet three times before exceeding its speed. The apparitions were so many that Captain Filer retired from the Army and dedicated the rest of his life to the study of extraterrestrial life.

Another witness to alien interference during the war was american General George S. Brown, who reported that one night, early summer of ’68, his platoon spotted lights in the sky. “We immediately thought they were enemy forces and went into combat, but we didn’t find anything, just the lights at all times. We did not treat them like extraterrestrials, but as opponents in the midst of battle,” the General said.

In June 1968, in the demilitarized zone, reports of strange floating lights came from Australian soldiers. NATO forces would send jet fighters to investigate, forcing the strange lights to head out to sea. A burst of gunfire came from all directions. However, no direct impact on the strange lights occurred. In fact, the only damage was caused to the Australian ship, HMAS Hobart, which nearly sank after receiving the impact of the shooting.

And these weren’t the only sightings in Vietnam.

Pete Mazzola was a Vietnam veteran who later became one of New York’s most respected ufologists, founding the “Scientific Bureau For Investigation” research center to which he devoted the rest of his life until his death in 1987.

Mazzola said that while patrolling the jungles of Vietnam, he saw many strange aerial lights. These objects were similar to “shooting stars”, except for the fact that they changed speed and direction at will.

One of Mazzola’s strangest encounters took place in 1966, when his unit was camouflaged in the middle of the jungle and a strange object appeared in front of them. Everyone could see the ship hovering over the rice pads ahead. Assuming the object was an enemy ship, he followed procedure and reported the coordinates to nearby American ships.

The U.S. Navy sent jet fighters that began bombing the object, but most strange of all, Mazzola insists that the projectiles appeared to explode in the air before they hit the target. After several minutes, the object simply accelerated directly upwardat an impossible speed.

The Incident at Nha Trang Base

Another unexplained event occurred in 1966, when about 1,000 U.S. military personnel witnessed yet another strange sighting.

At the American base of Nha Trang, while many soldiers were enjoying the period of inactivity, the sky suddenly lit up fantastically. From the north, a bright light moved toward the base. It accelerated, slowed down and increased speed again, but continued in their direction.

As it approached, all electrical equipment at the base shut down. Even the engines of the planes, which were running in standby mode, shut down and everything was silent. Not knowing what to do, the soldiers just watched the strange shiny ship hovering over them.

After a few minutes, the ship accelerated at an incredible speed towards the sky.

One of the strangest accounts of mysterious activities surfaced in January 2015 and showed a photograph taken by Ho-Khanh in San Doong Cave. He claimed that the figure was a “Creature of the Devil”, with the lizard face, but that he walked like a human.

Since the cave became open to the public in 2013, there have been several regular reports of strange sightings, and the cave system itself is so gigantic that much of it still remains unexplored.

About a month after the strange photograph began circulating, a former U.S. Army soldier who served in Vietnam spoke out and told in an interview that his unit’s base was near the San Doong Cave, and an incident that occurred in 1970 seems to confirm with the reports that are emerging in that site today.

According to the soldier, who preferred to remain anonymous, a strange “humanoid lizard”, at least two meters high, was parked near the entrance to the cave. The orders were to open fire, but the strange creature simply disappeared and no body or signs that the lizard-like figure had been injured were found.

The soldier also reported that he found it strange that no one in his unit was questioned or had to give statements about the incident, which made him believe in a deliberate cover-up of the intriguing event.

The Enigma of the Anasazi Tribe