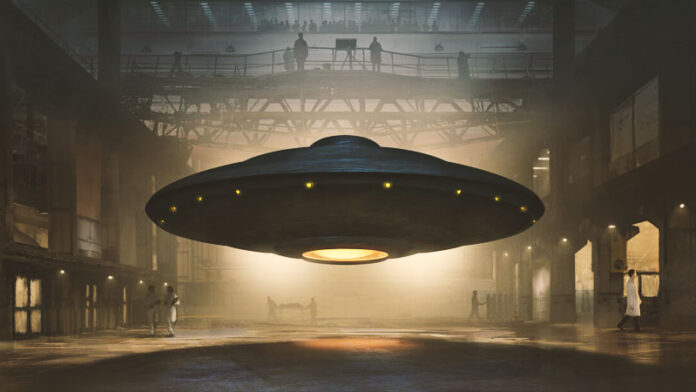 Wright-Patterson Air Force Base is located in the U.S. state of Ohio and was the site of the Blue Book Project, which marked the beginning of official U.S. government investigations on UFOs sightings between 1951 and 1969.

There are many rumors surrounding Wright-Patterson Base that involve what may have happened inside a specific building, known as Hangar 18.

UFO enthusiasts believe the government has hidden physical evidence from its investigations, including flying saucer wreckages, alien remains and even captured aliens, in this mysterious hangar, more specifically inside a sealed and highly protected location called the “Blue Room”.

The story of Hangar 18 begins with the UFO incident in the Roswell Desert of New Mexico in July 1947.

According to a press release issued by The Roswell Army AirField at the time, its personnel inspected a crashed flying saucer and it was sent to a “superior headquarters.” The next day, a second press release from Fort Worth Air Force Base in Texas, allegedly the previously mentioned headquarters, stated that the flying saucer was actually a weather balloon. This claim was recognized as false by the U.S. Air Force in 1994, and was replaced by the claim of failure in a test of a secret surveillance device designed to fly over nuclear research sites in the Soviet Union.

Many UFO researchers, based on reports of former military pilots, believe that the materials collected at Roswell were divided and sent to bases other than Forth Worth, including Wright-Patterson, which stored them in Hangar 18.

The pilot Oliver Henderson claimed to have transported wreckage from a ship along with several small alien bodies from Roswell to Wright-Patterson and, according to the son of another pilot, Marion Magruder, his father claimed to have seen a living alien at Wright-Patterson in 1947 and told them “it was a shameful thing what the military did, destroying this creature while conducting tests on it”.

U.S. Senator Barry Goldwater of Arizona was the Republican candidate for president in 1964 and was very interested in UFOs, especially in Hangar 18. He went so far as to say publicly that he tried to gain access to The Blue Room and Hangar 18 in the early 1960s, but the access was denied by General Curtis LeMay.

After the Blue Book Project was shut down in 1969, rumors continued to swirl around Wright-Patterson Air Force Base and its mysterious Hangar 18.

In 1974, a Florida ufologist named Robert Spencer Carr publicly stated that the Air Force was hiding two flying saucers of unknown origin inside Wright-Patterson in Hangar 18. Carr claimed to have a high-ranking military source who saw the bodies of 12 extraterrestrial beings during the autopsies that were performed on them.

The widespread media coverage of Carr’s allegations resulted in the release of the 1980s movie “Hangar 18”, where two pilots investigate the government’s cover-up of a UFO’s crash and subsequent testing of captured extraterrestrials and their technology at a secret military base, which helped strengthen stories about experiments at Wright-Patterson Air Base as a laboratory of UFO-related government activities.

The Air Force, however, categorically denies rumors about UFOs and extraterrestrials and claims that there has never really been a Hangar 18 anywhere at Wright-Patterson Air Force Base, even though there is actually a hangar named “Building 18” at the base’s premises.