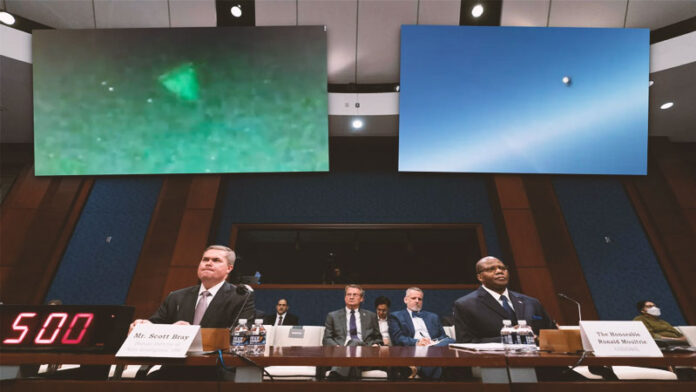 The last time UFOs were discussed in the US Congress was in 1966, during two sessions convened by Gerald Ford, who in 1974 was elected president. At the time, a massive UFO sighting took place in Michigan, with numerous witnesses, and the case was widely reported by the news agencies.

In 2017, several US media outlets, such as The New York Times, CNN and The Washington Post, reported that the Pentagon was investigating UFO sightings by fighter pilots and these objects had interfered with nuclear weapons facilities.

Following a request from the US Congress in 2020, based on the Freedom of Information Act, the government promised to publish a report with the information on UFO sightings and unexplained cases over the past two decades.

The document was not released until 2021, and the US Director of National Intelligence simply stated that there was no explanation for dozens of UFO incidents.

The matter made headlines again in May 2022, with the first public hearing on the UFO phenomenon in 50 years.

During the hearing, US Deputy Director of Naval Intelligence Scott W. Bray stated that US intelligence teams have not yet discovered “non-terrestrial origin” in any of these incidents.

“No organic or inorganic material or unexplained remains were ever obtained, and there was no attempt to establish communication with these objects. Yet,” Bray said.

During his presentation, several classified images and videos were shown. One of the images was captured by a US Naval Air Systems Command night vision camera. It is a kind of triangular object that flew over the sky of the United States and, for a few moments, remained stationary.

As explained by Scott W. Bray, it didn’t appear to have any propulsion system, but it flickered and disappeared as mysteriously as it had appeared.

“I don’t have an explanation of what this object is,” Bray said.

In another case, according to the Deputy Director of Naval Intelligence, the images would have been captured by a military aircraft operating in a training camp. A spherical object quickly crossed the sky and was seen by the pilot in the cockpit.

US congressmen expressed concern that UFOs were a kind of unknown technology of other countries and could pose a threat to the nacional security of the United States. However, the hypothesis of a possible extraterrestrial origin of the objects in the images did not reassure anyone.

Under Secretary of Defense for Intelligence and Security Ronald Moultrie also admitted that there was no reasonable explanation for some of the incidents in his database. Most reported UFO sightings can be explained, and the unexplained incidents are in the minority.

“Any objects we find can probably be isolated, characterized, identified and, if necessary, mitigated. There are a small number of events where there are flight characteristics that we cannot explain with the data we have available. Those are obviously the ones that interest us most,” Moultrie said.

According to the released information, the United States has an official database in which about 400 incidents involving UFOs are described, and 11 of them almost ended in accidents with American planes. Many similar events also took place in Canada.

The US military guarantees that the objects that starred in these unexplained aerial phenomena, recorded in this database, seem to have no means of propulsion, something technically impossible to decipher.

The fact is that the latest news about the UAP, the new acronym for “Unexplained Aerial Phenomena”, paves the way for the possibility that, at some point in the future, we will receive visiters from interstellar space.