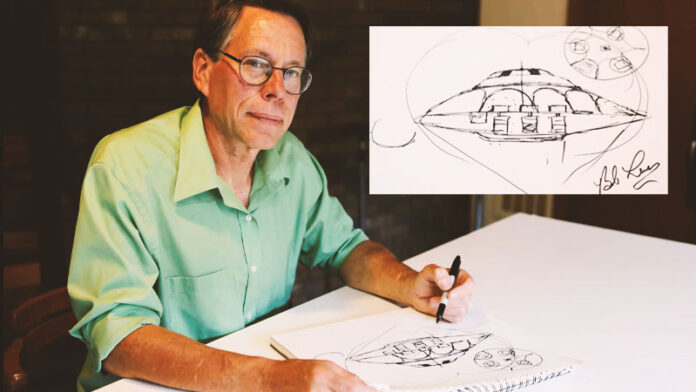 In 1989, physicist Robert Scott Lazar contacted KLAS television in Las Vegas, USA, asking for an opportunity to spread his story, becoming the great responsible for telling the world about the existence of Area 51 and the investigation of alien spacecraft made by the United States government.

When Bob Lazar introduced himself, he did so anonymously under the pseudonym “Dennis” and claimed to have worked as a physicist on the Galileo Project, the government’s most secret project at the time, which focused on reverse engineering of alien technology for the American government and studies were conducted at a top-secret base called S-4, located 10 miles south of Area 51.

According to Lazar’s description, the S-4 Base has nine hangars built inside a mountain and the doors of each hangar were designed at an angle to match the mountain’s slope, being covered with natural material to prevent its discovery by satellites or spy planes.

Lazar claimed to have seen nine different alien spacecraft at the base during the period between December 1988 and April 1989, when he was working there, and presented following technical details: “The propulsion mechanism is a gravity propulsion system. The power source is an antimatter reactor. This technology does not exist.”

His work included the research of the fuel used by the spacecraft, a compound with an atomic number previously unknown, called Element 115.

This chemical element has unusual properties that would allow flying saucers to bend the space around them, he also clarified that this element could not yet be synthesized on Earth at that time.

This extraterrestrial technology allowed the passage from point A to point B, reducing travel distances on a flight of a few minutes, regardless of distance, similar to the concept of “wormhole” proposed by Albert Einstein and Nathan Rose in 1935.

Lazar claimed to have received information about the history of extraterrestrial activities on Earth during the last 100,000 years carried out by aliens that originated on the fourth planet of the binary star system called Zeta Reticuli 2, known as ‘greys’.

He also claimed to have worked on a flying saucer with a diameter of 9 to 12 meters. The ship would have a command console and the seats were small, almost like those used by children.

Bob Lazar’s revelations ended up radically transforming his life. After becoming known, his life was put at risk and he came to receive numerous threats from various interest groups and government agencies.

Journalist George Knapp was intrigued by Bob Lazar’s story and wanted more information, but unfortunately, S-4 Base was out of reach as it is on restricted ground where no one outside the government could intervene.

After delving into this enigmatic story, Knapp encountered even more problems that almost led him to a snarling alley.

Bob Lazar’s information was difficult to verify, his birth record at the hospital, university documents, manuscripts and evidence of all of Lazar’s work were erased, and there was no evidence of his employment at the Los Alamos National Laboratory, a federal laboratory belonging to the U.S. Department of Energy that employs more than 10,000 scientists among physicists , engineers, chemists, mathematicians, biologists and other scientific specialties.

However, his name appeared in a telephone directory of Los Alamos scientists and a photo of him appeared in the July 1982 issue of Los Alamos Monitor, showing Bob Lazar next to a “jet car” that could reach 200 miles per hour and mentioning his job as a scientist at los Alamos National Laboratory.

Whatever his reasons, Lazar played a key role in exposing Area 51, a top-secret facility that had never been mentioned before, and considering the extreme level of secrecy that this government institution involves, it is easy to link the disappearance of its vital records to maintaining the interests of Area 51 as an installation until then non existent.

According to George Knapp: “Lazar and others were bugged and followed, and it certainly seemed like someone wanted to scare him into remaining silent, or maybe they wanted to make him a little crazy. I’ve been there for many of these events. I saw them with my own eyes and also witnessed the result”.

Bob Lazar described the cover-up as “a crime against the scientific community” and proved to be a reliable source with a solid background in physics and engineering, offering a wealth of evidence to support his claims and has since gained a large following. However, there are many skeptics who think that everything was an act performed for their own benefit, just to promote themselves.

If Lazar is correct and telling the truth, his testimony could be the most descriptive and unique explanation of something that has been happening before us for many years.

Located in the Nevada Desert in the United States, Area 51 is a military base created in 1955, at its peak in the Cold War. But, as is the case in several U.S. Air Force facilities, his role had never been publicized.

Only in 2013 the United States government publicly did confirm its existence through CIA documents, which were obtained by the George Washington University National Security Archive, a nonprofit organization made up of journalists and researchers who had requested confidential information under the Freedom of Information Act.

The organization’s director, Jeffrey Richelson, had received documents on the matter in 2002, but all references to Area 51 had been removed. Richelson then remade the application in 2005, and received the results just 8 years later in 2013.

According to the CIA document, however, the site was only a test base for secret aircraft during the Cold War, especially the Lockheed U-2, a high-altitude reconnaissance aircraft used by the United States Air Force.

Even today, area 51 airspace is restricted and the base is heavily protected.

In 2018, Bob Lazar returned to appear in a documentary produced by Jeremy Corbell, which is not a story in the traditional molds, but an invitation to the viewers to open their minds.

“Bob Lazar: Area 51 and Flying Saucers” tells the story of the man who reportedly worked for a year at S-4 Base near Area 51 in the Nevada desert and participated in a series of reports on the existence of alien ships as well as extraterrestrial creatures used as a research object by the U.S. government.

The film begins with Bob Lazar’s house being raided and searched by the FBI and this is pretty compelling information, after all government agents don’t go around just randomly raiding houses unless there’s a real clue or if they’re really trying to intimidate someone.

“I want to show you what happened to my life since 1989 and, who knows, have a little peace,” Lazar says.

The scientist says that the authorities tried everything to prevent him from making his shocking revelations, he was warned that he would be accused of espionage and threatened in various ways, as well as members of his family.

In addition to reaffirming the veracity of all the points cited in his previous interviews, Lazar also recounts the time he was walking down the base corridor when he peeked through a window in one of the hangars and saw “something small with long arms.”

In the documentary, he states, “I don’t follow stories or reports of UFOs and I’m not interested in researching life outside the Earth. My main interest was, and still is, incredibly advanced technology. I know that if we can control and develop it, it can change the world.”

He insists that his motivation for the complaint, both at the time and now, was to protect himself, and confirms his point by stating that he never benefited financially from bringing these revelations to the fore. In fact, the consequences of this only made his life unbearable and regrets having denounced the alien testing area.

“At this point in my life, I would probably slant myself not to say anything. I don’t like being in the public eye. I don’t make money to do that. And frankly, I could come up with a better lie, but I don’t have the motivation to lie,” says Bob Lazar.

He currently lives in Michigan with his wife Joy and runs United Nuclear, selling lasers, chemicals and scientific, and even more than 30 years after exposing the existence of Area 51, Bob Lazar still suffers from the consequences of the bombshell revelation: “Someone monitors me and, at the risk of looking paranoid, I always have the suspicion that someone is watching me. It’s a difficult thing to get out of your head,” said the man who forever changed the course of ufology and today fears for his own life.